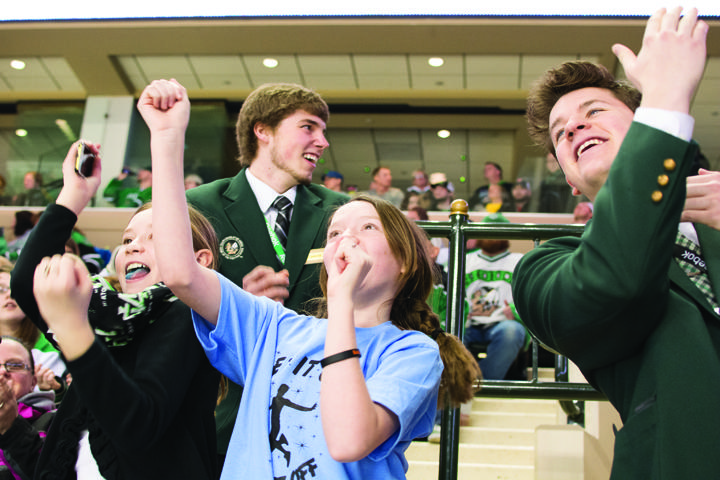 Friends stop by or shout hello from across the way. Strangers pat the boys on the back and shake their hands as if they’re meeting celebrities.

Landon Thiel and Tucker Williams stand outside sections 110 and 111 on the concourse of the Ralph Engelstad Arena, wearing their black pants, dark green blazers and nametags as two of the many ushers that assist guests at home hockey games.

And when the game starts back up again, the two UND freshmen step inside the ice area, directing guests to their seats or making sure no one steps ahead of the green line when the puck is in play.

When the whistle blows, the music starts. That’s when Thiel and Tucker enjoy their jobs most.

Their dance moves started garnering attention in December, and one fan’s video of the boys posted to Facebook and YouTube that has thousands of views instigated a stream of media following and appreciation from guests at the Ralph who viewed them from across the ice or on the Jumbotron, dancing a routine they perfected since their days in middle school.

“We were just having fun,” Thiel said. “We’ve been best friends for seven years now, and we were out here messing around having fun and people started to like it. We did it for them to make them happy. We were both kind of surprised we were like, ‘No way this is actually happening, there’s no way people actually enjoy it that much.’ But then it started to blow up.”

Local news stations started calling the boys. They were booked on radio stations and made appearances on TV. They welcomed the attention they never expected and kept doing what they were doing.

They didn’t do it for the interviews or the fame; they did it because they noticed people around them having a good time.

“I definitely thought it blew up a little bit more than what it was probably going to originally,” Williams said. “I guess we try to make work fun. Everyone here loves it, and they get our energy and we try and through some of it back at them and get a good atmosphere for the boys playing the game.”

The perspective from a fan named Tammy in section 111 was what was posted online. Thiel messaged Tammy to thank her for posting the video, and the boys came to know that Macy, Tammy’s 21-year-old daughter has cerebral palsy, became a huge fan of the boys.

Thiel and Williams spent a day in Fargo getting to know Tammy and Macy at a coffee shop, and were humbled by their experienced.

Thiel and Williams started working at the Ralph in November. They were college freshmen looking for a job they could enjoy together, and the perk of watching hockey at the same time wasn’t all that bad.

But their  seven year friendship didn’t start off on a good note.

Before they decided to go to the same college and live in the same residence hall, they met at South Middle School in Grand Forks and played football together. Thiel didn’t appreciate Williams, and the feelings became mutual.

“I was kind of the guy that wasn’t that good, so I’d try and get the boys rowdy and I went one time to slap Landon’s helmet, and I turned around and he got mad at me,” Williams said.

“I was trying to get into my own zone in football, and then you have him coming by just screaming at the tops of lungs just smacking helmets,” Thiel said.

The football season eventually ended, the boys got to know each other and they realized they could stop hating each other.

In gym class, they were taught a dance so to break the awkward tension at middle school dances — a dance they never expected they’d be doing this many years later in front of thousands of people.

“Hearing about it all over, I was really happy for them,” said Landon Hayes, Thiel’s roommate and Williams’ suitemate. “It was good to see them having fun and doing what they always do. It was well deserved. They’re really fun, outgoing, and just like to have a good time, no matter what the situation. “

It’s not always just Thiel and Williams. Young fans see the boys dancing, and they’re promptly invited over to make their debut in front of thousands.

The experience in itself is what they enjoy — being a part of the excitement on Friday and Saturday nights with so many others, especially as hockey fans.

Williams loves the dancing, but there’s another part of his job he truly appreciates.

“It happens every Saturday,” Williams said. “It’s when they sing the national anthem, the curtains close, and, as soon as the lights come on, Saturday Night’s Alright comes on by Nickelback comes on and I move the curtain. Everybody’s getting excited. I get goosebumps every time.”

They hockey season is coming to a close, and with only a few home games left, Thiel and Williams may be putting their moves away for a while — but not for too long.

Their first season in the green blazers was a memorable one, and coming back next season isn’t out of the question.

“It’s kind of expected by the fans, isn’t it?” Williams said.

“As long as I’m working here, there will be dancing in my section,” Thiel said.