Persevering through the valley 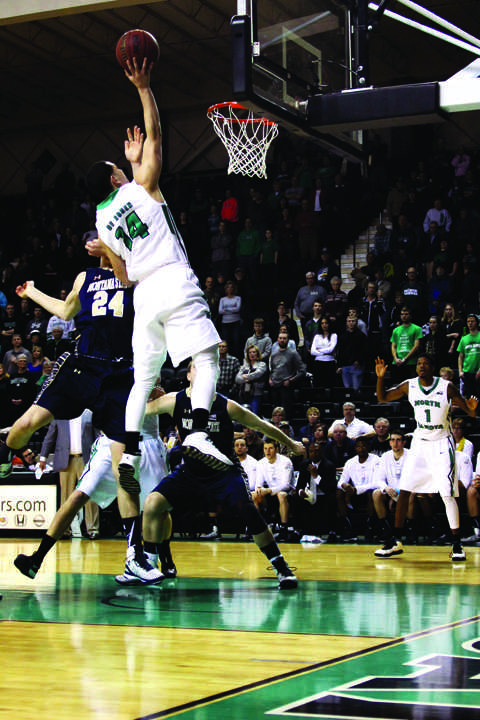 It’s Jaron Nash’s senior season. He only has two more home games left in his college career, and ending it the way it’s been going isn’t what he wants to do.

For Nash especially, his dream is still alive.

“I still want to get to that conference tournament,” Nash said. “I feel like we can’t quit, so personally I haven’t fulfilled it yet. I’m not going to give up.”

And neither is the rest of the team.

The team hosted Northern Arizona last night at the Betty Engelstad Sioux Center, and will look to elevate its performance once again when Southern Utah travels to Grand Forks on Saturday at 2 p.m. to take on North Dakota.

Jones has been through challenging seasons, but he said he’s never been through so many tight contests that are decided by just a few possessions.

“Obviously, it’s a chance for me to grow, and I welcome that as a coach,” he said. “I think our players are growing as young people.”

UND’s young roster was greeted by new assistant coaches this season, and the team grew together. It grew through a reliance on older members of the lineup that turned into a building confidence level for younger players.

Jones said he is confident that the challenges the team is going through this season will prove to be a learning point in preparing next year’s roster.

“Before you get to any mountain top, there’s always a valley,” Jones said. “We just happen to be in the valley. This year, I truly feel, is going to catapult up in the future, because if you want to be successful, you’ve got to go through some down times too, and you’ve got to persevere, and it’s going to show a lot about your character.”

There have been nine different starting lineups this season, and UND has seen four different players start at least three games playing in the center position.

Seniors on North Dakota’s roster have been productive.

Nash currently leads the team with 13.2 points per game, while Lenny Antwi is posting a career high 6.4 as of Wednesday. Seniors Ryan Salmonson and Chad Calcaterra also have contributed to North Dakota’s success.

But beyond the numbers, the leadership on this team has been what has pushed it forward.

“Our seniors have been great,” Jones said “They haven’t complained one bit. They’ve done a great job of keeping the guys positive, and that doesn’t show up in box scores, that shows up in your locker room. That shows up at practice every day and they’ve done a wonderful job of that.”

Beyond clinching a spot in the conference tournament, finishing strong against Southern Utah on Saturday and Omaha on Tuesday will be UND’s last chance to showcase its performance in front of supporters.

North Dakota hopes to put the losing streak behind and end its season on a high note.

While its numbers may not place it in the top portion or where it wants to be, it has to depend on the will of its own teammates and focus on each task at hand, learning with each opportunity.

“I think what we want to see is our seniors finish strong,” Jones said. “First and foremost, to leave a legacy, but also our young guys understanding what it takes that when they do things the right way, success will happen. They’re just learning from the season as a whole — looking at themselves, looking at what they can do better, where they need to continue to get better.”