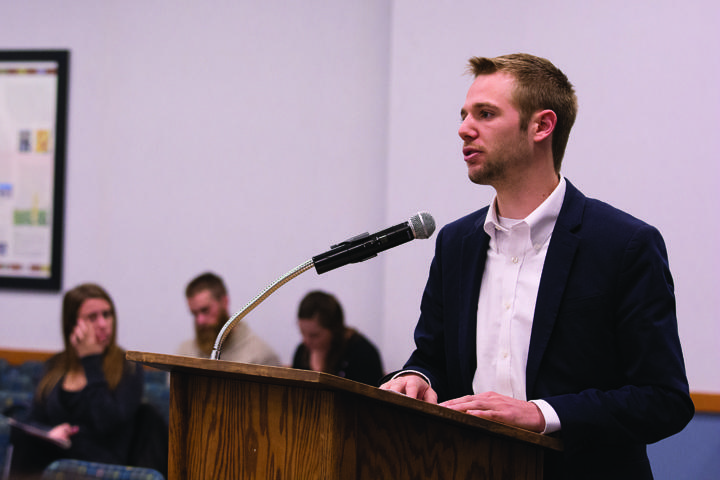 In its first meeting of the new semester, the Student Senate was busy with several resolutions in support of bills going before the North Dakota Legislature during the week of Jan. 25.

“This is a no brainer,” Senator John Mitzel said. “We are supporting the due process and the rights of students. It’s not right to put them in that situation to not have legal guidance.”

The second resolution focused on House Bill 1233, which would prohibit a tuition increase at any of the 11 North Dakota University System institutions until June 30, 2017. The bill would also allocate approximately $30 million to the State Board of Higher Education in order to offset the cost.

The third resolution was in support of House Bill 1261. That bill would promote the use of open resources on North Dakota campuses. Open resources include textbooks and online learning modules, and would significantly reduce costs for students when purchasing materials for classes. It also includes a program to incentivize professors to use the open resources in their classes.

Senator Travis Clark expressed concern that the open resources would get into competition like textbook producers do now, creating high prices again.

“It’s a net benefit for students,” Clark said. “It’s an arms race with these textbook companies. Now there will be an arms race for non-traditional materials.”

All three resolutions were passed.

Counseling Center Director Ken Carlson and Stephanie Baas presented to the senate about changes made and the how the center has been helping more students so far this year.

“The demand for services has increased at UND and across the country,” Baas said.

According to Carlson, UND is the only campus in the country that has a rehabilitation facility on campus, run by Jim Murphy.

“We are resetting our priorities, looking at clinical education and outreach,” Carlson said. “We realigned our mission, paying special attention to diversity. We want to enrich student learning.”