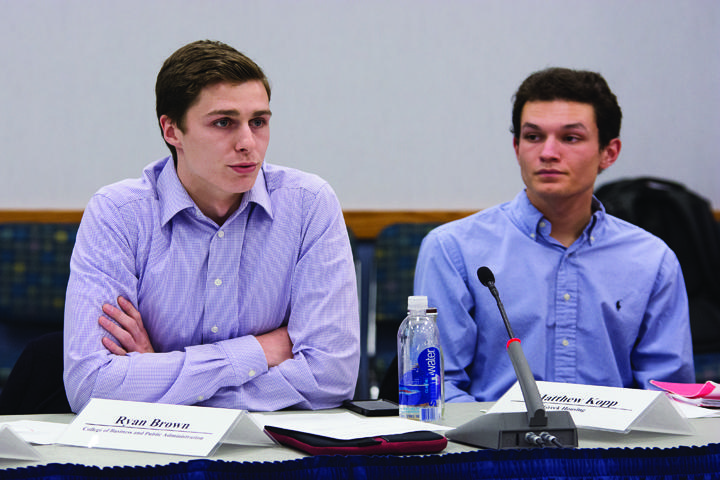 UND student senate passed three separate bills at its Nov. 16 meeting, doling out a total of $38,500.

The largest sum of money will be funding to keep the Memorial Union open 24 hours a day, Sunday through Thursday next semester. A total of $27,000 will be spent on the one-time project — $15,000 for staffing and $12,000 to install an electronic door access system.

“As of right now, the Union has a great structure to host this,” Student Body President Tanner Franklin said. “It has the food, parking and security.”

He is also working with University Police Chief Eric Plummer on getting the electronic door access system installed on the front door of the Union.

“This is something Brett and I campaigned on, and we don’t want it to get lost,” Franklin said. “There is a desire for the space on campus. The opportunity has finally come, and people are willing to make this change, so let’s do it as soon as possible.”

There is also a plan for UPD to move into the space the UND Ticket Office currently holds on the bottom floor in the Union to increase its presence on campus.

A program to increase school spirit on campus also was passed at the meeting, with $5,000 granted to get it up and running.

The Green Scene Program is modeled after similar programs at NDSU and Texas A&M. At NDSU, Bison Fight Friday awards prizes to students walking through the Union on Fridays who are wearing school colors.

The program will be run by a seven-person committee chosen by the executive members of Student Government. The program hopes to be up and running by the spring semester.

“I am grateful this was made,” Sen. John Mitzel said. “We don’t have pride in our athletic teams the way other universities have. Our football team is not doing too bad this year, better, and students still students still don’t go. This is a step in the right direction.”

Mitzel’s sentiments were echoed by others.

“This is the start to something bigger,” Franklin said. “Look around the room we’re in. There’s blue carpet, blue walls, hardly any UND icons. There’s a huge lack of school colors. This would be the initial program to try to change that.”

Senate was approached for the second year in a row about funding for the TedX Grand Forks event taking place on Feb. 21, 2015. Last year, senate gave $5,000 for the event and this year the initial bill proposed a $10,000 allocation for the event. With the higher funding, 125 students would be able to get tickets at a discounted price, senate would get 10 free tickets and organizers would be able to guarantee a live stream for the event. Last year, the live stream almost did not happen because of the high cost to put it on.

“This is a great event to include the university in the community,” Sen. Derek LaBrie said. “It’s really a benefit to students.”

Mitzel disagreed on the amount of money he said believed senate should contribute.

“I have a lot of trouble with the $10,000 level,” Mitzel said. “I don’t see a $10,000 return for students. It’s an enormous amount of money for the number of students who will be able to participate.”

Mitzel proposed an amendment to drop it down to $5,000, which would not guarantee the live stream for the event.

Senate then agreed to fund the event at the $5,000 level, with the addition of $1,500 in order to guarantee that the live stream would happen. That level would give 75 students tickets at the reduced price of $25.

Senate also discussed organizing watch parties on the day of the event.