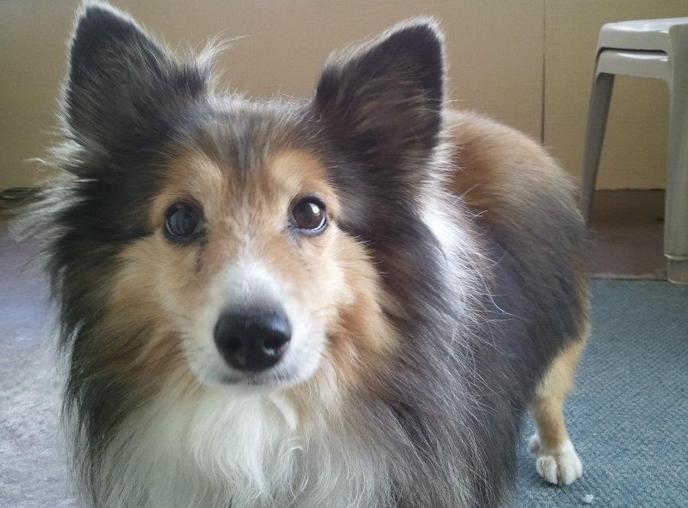 Duffy the dog looking dapper and incredibly adorable. Photo by Will Beaton.

Since I could remember, I have dealt with anxiety. I would often have panic attacks or become easily upset over school work or life in general. About six months ago, I decided I wanted to adopt a cat from the Humane Society. Meet Heidi. She is lovable, charismatic and only has one eyeball. We instantly became best friends. Since I have had Heidi, my stress levels have decreased, and she is my go-to when I need a break from reality. I find myself  calmer and more lively since she has become a part of my life.

This awesome little dude is Duffy. I took the above picture a few weeks before we put him down — which just happened to be a few weeks before I left for my freshman year of college in California. Since we’d had Duffy since I was 3 years old, it felt like so much change at once. One minute I’m putting down my life-long pet, and the next I’m getting on a plane to move to a city with 7 percent of the area and 780 percent of the population of our entire state. I was moving anyway, and Duffy wasn’t going to get to live in my dorm room. But the fact that the transition into life post-Duffy came at the same time as the transition into college helped me deal with them both at the same time.

Also, if you put one of those scented perfume samples from magazines on the floor, he’d roll all over them and smell awesome the rest of the day. So, yeah, Duffy rocked.

Growing up, I never had any real pets, so it is nice to not only have a pet but one of my own. I have to say that it is pretty nice knowing that you have a pet waiting for you when you get home, and that I really have been missing out on something special all these years.