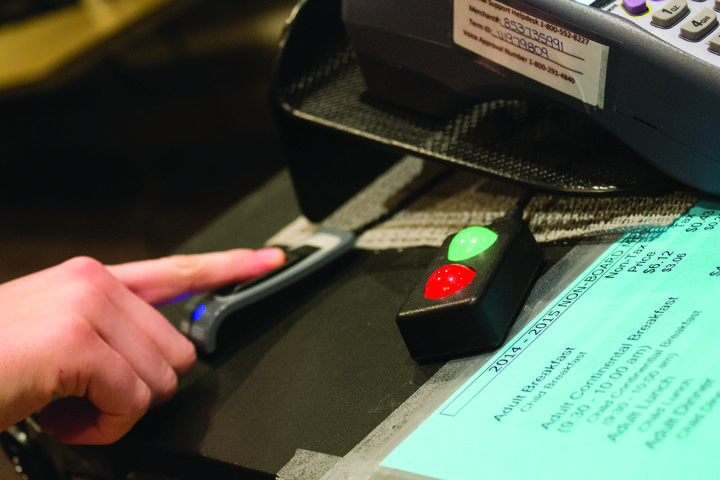 The UND dining centers have a lot of traffic throughout the day, so when a student is on the go, having fast access to the dining center is an ideal convenience.

With this need for quick access, the dining centers are currently undergoing a fresh and modern change — fingerprint scanning.

Student’s opinions about the new scanning technique, however, have been mixed.

An online survey was conducted of 100 students to get their opinion on the new fingerprint process. The results of student satisfaction with the scanners were split. About half of the students surveyed said they enjoyed the new scanning system, and the rest of the students who took the survey had concerns about the scanners being invasive, unsanitary and faulty.

“I definitely like seeing the school moving towards using newer technology,” sophomore Cameron Campbell said. “However, it’s common for the scanner to misread my finger or glitch, and I end up having to swipe my card anyway. I don’t think it’s any faster than card swiping, honestly.”

However, some students find the scanners helpful.

“I really like the fingerprint scanner,” an anonymous student who responded to the survey stated. “I think it’s convenient since I don’t have to fumble for my ID card or worry about not having it on me.”

A common concern that was found among students who took the online survey was the fear of the fingerprint scanner being a breach of privacy. Some students felt that once their fingerprint was taken, it became stored on a school databank. In response to this concern, the UND Dining Services website expresses that no fingerprint is stored and no biometric information is saved with a students fingerprint.

Another concern that was raised among students is the sanitation of the scanners. With so many students using the scanners throughout the day, freshman Morgan Wentz said she had concerns about the scanners not being hygienic for use.

“I don’t think the scanners are sanitary,” Wentz said. “I use the hand sanitizer by the trays right after I check in.”

Several students who took the survey shared the same concern, as many consider the scanners to be an easy way to spread germs, despite the availability of hand sanitizer present at all scanners.

There still might be some kinks to work out with the system moving towards the future, but with this new system in place, a push towards quick, convenient and card-less access to campus facilities may continue to grow.