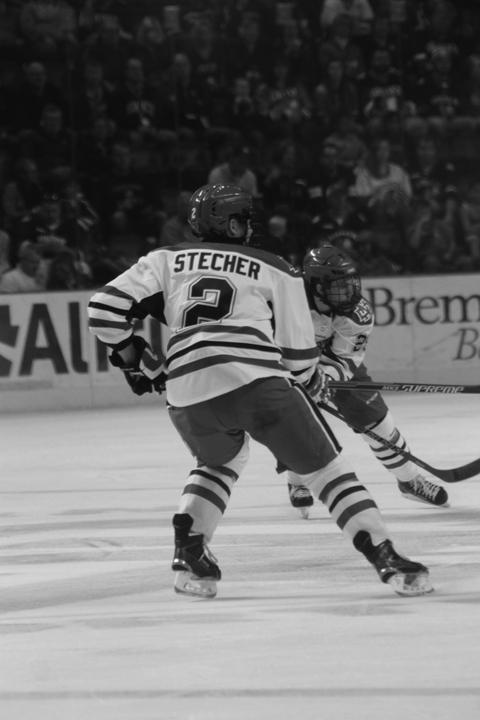 Nearly three weeks after dropping its regular season home opener, the UND men’s hockey team has yet to lose a game.

“We had a lot to prove,” UND junior Drake Caggiula said. “To lose 5-1 on our own rink like that, it doesn’t sit well with any of us. You’re never satisfied. You always want to be better.”

Stunned faces in the crowd following a bitter Bemidji State loss on Oct. 10 were short lived as North Dakota went on to sweep Colorado College on the road, and notch a win and a tie against then No. 5 Providence State in a critical non-conference home series last weekend.

UND will look to continue its consistency as it hosts Air Force on Saturday evening at Ralph Engelstad Arena in the non-conference U.S. Hockey Hall of Fame game.

Despite the absence of Mark MacMillan — one of UND’s cheif penalty killers and power play skates who remains out indefinitely due to injury — the team will look throughout its capable lineup to fill the gap this weekend.

“It’s just a natural progression for our team,” UND coach Dave Hakstol said. “One injury isn’t going to alter how we’re building or designing or developing our team.”

Sophomore defenseman Troy Stecher has continued to develop his game as he garnered NCHC honors as Defenseman of the Week following his four-point weekend against the Friars.

During freshman year, Stecher was the only freshman to appear in 42 games and collected two goals and nine assists to claim the No. 6 spot in the NCHC for scoring among rookie defensemen.

“Probably some of the things that remain personality traits to this day are his competitiveness — a will to win battles,” Hakstol said. “In nearly every situation, he’s going to go out and he’s going to out-compete his opponent to get the job done. You see that game in and game out with Troy and in a lot of situations.”

The Richmond, British Columbia native has skated with his team in what have been consistent first periods of hockey games, paying close attention to the behavior that will dictate the remainder of each game.

“I think it’s a huge staple to our hockey team,” Stecher said. “You’re setting the tone for the weekend, especially on Friday night in the first period. You’ve got to make it a war out there. That’s what we’ve been trying to do. We’ve got 20 guys going to war together. We’re sacrificing opportunities for each other. We’re going to battle hard.”

The battle continues as a tenacious Air Force team that has posted a 2-4-0 start to its season. The last time the two teams met was on Oct. 7, 2011 in Grand Forks when UND defeated Air Force 4-3, extending its all-time record to 4-0-0 in the series.

With only one game to play during the weekend, the team has been working toward improvement against an aggressive team.

“It’s a one-game series so they have nothing to save for the next day,” Caggiula said. “They’re going to come hard and it’s going to be a great weekend.”