The Used triumphs over other bands 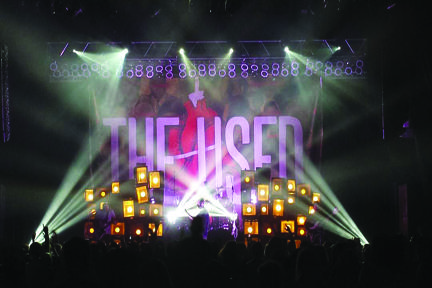 The Used performing on Friday night at The Venue in Fargo. Photo by Misti Meads/The Dakota Student.

Die hard fans of The Used and “Taking Back Sunday” gathered at The VENUE @ The Hub in Fargo on Friday night to watch the punk rock bands perform.

The concert was a general admission and open to all ages, even though the content of the music is more for older listeners. Tickets were $32 a person, but if you were over 21, you could buy a couch or table that was closer to the stage for an extra $150, which seemed like a waste of money because other audience members walked under the rope to sit at them anyway.

Opening act Frnkiero and the Cellabration had a small fan base at the concert, but I personally wasn’t a fan. They were mediocre for an opening act and played for nearly an hour, but I was bored listening to them.

After the opening act, The Used began to set up the stage for its performance. Its set was one of the most interesting I have ever seen.

The props consisted of about 50 television sets all stacked together — some sideways, some upside down. On each television set was a picture of a man with a red line across his face. When the lights would turn on, the man on the screen would disappear. This created a really cool effect and wowed the audience.

The Used began with one of its most popular songs and continued to play its major hits — “The Bird and The Worm,” “The Ripper” and my favorite “All That I’ve Got” throughout the night.

I became a fan of The Used when I was in sixth grade and enjoyed listening to its hits that came out during that time.

I’m not a huge fan of their newer stuff. But during the show they only played two songs that were newer and that I didn’t know.

My favorite part was when lead singer Robert “Bert” McCracken interacted with the audience. This made the show fun. One audience member even threw their bra on the stage with a phone number on it. McCracken then read the number out loud to the entire crowd and then hung the bra from his mic stand and began singing again like nothing even happened.

The band played for over an hour and I was voiceless and deaf by the end of its show.

However, “Taking Back Sunday” wasn’t my favorite performance. They did interact with the crowd during the beginning. The set wasn’t as good as The Used, but the energy by TBS continued the entire time I was there.

Overall, I would give the entire concert a four out of five stars. If it was just The Used playing I would give it a five, but the opening act was boring, and I was too tired to stay and finish watching “Taking Back Sunday.”

Misti Meads is the Features Editor for the Dakota Student. She can be reached at [email protected]