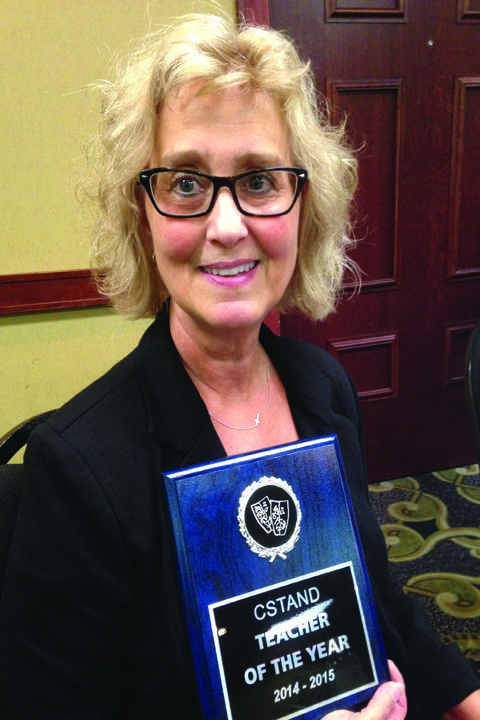 Professor Mary Haslerud Opp, who has been a part of UND for nearly 34 years, recently received a teaching award from a North Dakota organization.

Haslerud Opp was awarded “Teacher of the Year 2014-2015” by the Communication, Speech, Theatre Association of North Dakota.

The last UND instructor to win CSTAND “Teacher of the Year” was Steven Rendahl, who took the award home 19 years ago in 1995.

CSTAND is an association comprised of high school and college staff and instructors from the state of North Dakota.

“This award made me feel awesome,” Opp said. “My friend who is on the board emailed me telling me I had won. I emailed her back and asked if it was a joke. I thought she was kidding. I couldn’t really believe it. She explained that this is for real and I deserve it.”

All of the members that make up CSTAND gather at conventions and eventually vote on various categories like “Teacher of the Year,” Hall of Fame members and “Scholar of the Year.”

Opp received her undergraduate degree from UND in English education and a minor in communication.

After some time away, she decided to come back to UND where she received her master’s degree in education in communication with a minor in counseling and guidance.

She began teaching public speaking classes at UND way back while working towards her masters degree.

Eventually she began working on her Ph.D., which she says she didn’t get around to finishing because she rejoined the communication program and began working as the director of public speaking.

“As a former student of (Opp) I can say she is an amazing person and great teacher,” UND senior Kelsi Ward said. “You can tell she loves what she does and truly cares about her students and their grades.”

For Opp, teaching has been a lifelong passion.

“So that is actually why I originally decided to teach. There are no if, ands or buts about it. I can be feeling just crappy and once I go into the classroom I feel good again.”