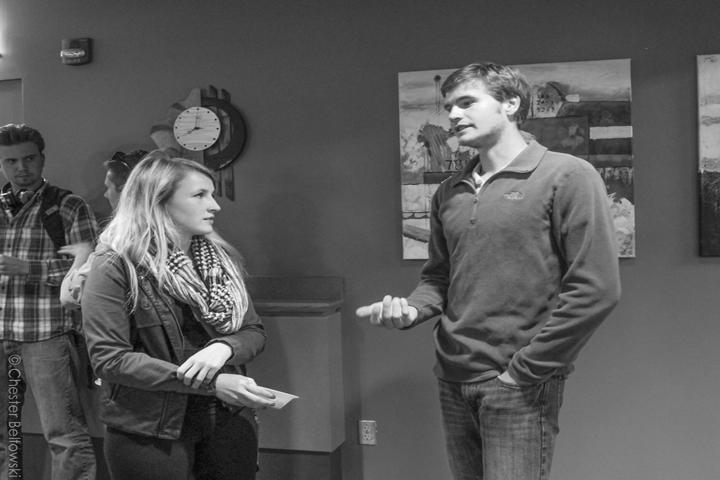 One of UNDs newest clubs, the Running Club Team, put together an ice cream social on Monday night in the loading dock for its inaugural kick off.

Co-Presidents Craig Knutson and Anthoni Morrow said they are both excited to get the ball rolling with the new organization.

Previous UND students had wanted to start the club and even had a constitution written two years ago, but the club never took off. He and Morrow wanted to get it in motion.

“We picked it up from where they left off,” Knutson said.

“The conception was last semester,” Morrow said. “We were really pumped about it all summer. It’s great how fast it really kicked off. I wasn’t expecting it, but it’s definitely been working so far.”

Knutson said that by being the “Running Club Team,” it means the group will run together but also participate in competitions.

At the collegiate level, sports teams only have so many spots on the roster, so not all students can be involved in what they’d like. Collegiate sports aren’t for everyone, but Knutson and Morrow want to make running available to anyone interested.

“It is open to everyone. It is a great environment no matter what skill level you are,” Morrow said. “We are very inviting and would love to see anybody come out, whether you are just starting out running, or if you are a long distance runner with the top guys.”

The team is open to both men and women at any skill level to compete in a number of different events.

“We want the team to be represented at 5ks, 10ks, indoor track meets, road races and things like that,” Morrow said. “We’re even looking into volunteering at road races that are coming up.”

Their short term goals are to get people involved. Founding group members said they are willing to work with anybody to help them develop.

Eventually, the team would eventually like to compete at a higher level.

“We would love to compete against other colleges,” Knutson said. “(We) encourage all to come. We can grow as a team.”

Knutson and Marrow hope to set aside time throughout the week where group members can run together.

Seniors Billie Herauf and Elisa Head are excited to see what the new club will have in store.

“Not only is (running) a stress reliever and keeps you in shape, but you can clear your head and have a little ‘me time’ while you’re (running),” Head said.

Students can find more information about coming to the next meeting on the group’s Facebook page.

“Just bring a pair of shoes,” Knutson said. “That’s kind of the cool thing about running. Anybody can do it.”