The toughest race in N.D. Uff-da! 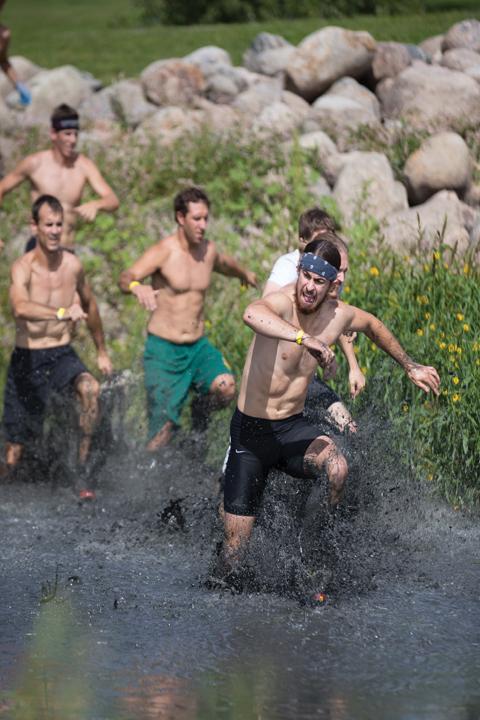 Participants struggle through the Red River during the 2014 Uff-da Mud Run on Saturday. Photo by Chester Beltowski/The Dakota Student.

Attending a school in the upper Midwest, we’ve all heard the expression “Uff-da.”

This Norwegian term can be used when one is surprised, exhausted, upset or relieved. Uff-da roughly translated is — “I’m overwhelmed.”

Professor assigned too much homework? Uff-da. No longer on crutches after four months? Uff-da. A runner just completed a muddy 6k with 25 obstacles? Uff-da.

“This is where pavement-boredom-ordinary-lazy-security-wanderlust-routine your comfort zone ends,” was the starting line banner that appeared Saturday during the 2014 Uff-da Mud Run put on by ENDracing.

Spectators lined the Sorlie Memorial Bridge while contestants paced near the starting line — “Begynnelse,” in Norwegian.

The Uff-da Mud Run is a course unlike any other 6k. This 6k (about 3.7 miles) is filled with various obstacles covered in mud, rocks and ice water.

Before the race began, some racers were stretching, some were walking the course mentally preparing for what was ahead of them and others decided they were going to wing it.

The UND brother and sister duo Jory and Kali Miller decided they were going in unsure of what was ahead of them.

Michael Jancik and Hayley Spalding did the Uff-da Mud Run last year and couldn’t resist the temptation of it this year.

“I absolutely loved it,” Jancik said.

“The mud itself was the best part for me,” Spalding said. “I’m not a runner, but being with my friends and hearing the cheering was awesome.”

T-shirts that caused too much resistance were left on the side of the course, and tennis shoes were sucked off contestants’ feet in the mud-filled pits.

Teams began to form whether contestants came alone or with friends. Some of the obstacles were a little tricky, especially for those lacking height.

“Tredobbelt Vegg” — Triple Wall — was where runners saw the camaraderie. Contestants had to climb three walls, all increasing in height. Some were boosting people up, while others would help pull them over.

East Grand Forks and Grand Forks Fire Department paramedics were standing by in case of injury and ENDracing volunteers were stationed at every obstacle to make sure the contestants knew what to do.

Life vests were supplied when contestants had to cross the Red River while paddle boarders and kayakers were stationed in the water to assist people across.

The 25 different obstacles included: scaling over hay bales and immediately dropping to the ground to crawl under wire, running up hill while flipping semi tires and crossing the 68 degree Red River multiple times.

“My favorite obstacle was the ice dip, where you had to jump into a dumpster filled with ice and get a colored golf ball from the bottom,” Jancik said.

Every obstacle had a sign in Norwegian and English that told the racers what was coming up next and the difficulty of it. The first sign read “Inngang eksamen” which in English means “entrance exam.” For this obstacle, the runners had to run down a rocky incline into a mud pit, then back up rocks directly into the second obstacle “Trett Allerede,” or “tired already” which consisted of running through old tires.

After seeing the course and what the participants endured and conquered, one would understand the true meaning of Uff-da!