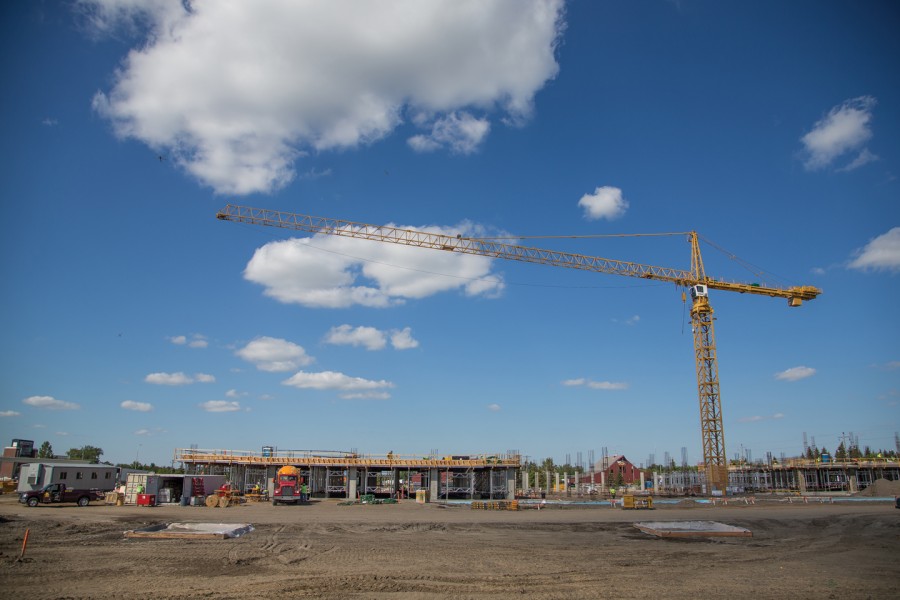 The outline of a construction crane above the worksite of the new School of Medicine. At 325,000 square feet and a cost of $ 124 million, the building is expected to be completed in Summer 2016. Photo by Chester Beltowski/The Dakota Student.

Students entering the Memorial Union sometime during their first week of school were met by a different Union than they left in mid-May.

Sheetrock, construction tape, hard hats and workers are all around. Not only are new areas and services being built, but old businesses are moving around to make room for the new.

One of the biggest changes to the Union is the introduction of “One-Stop Student Services” on the first floor. Like many projects still underway on campus, the One-Stop office is not yet operational.

Associate Vice President of Health and Wellness Laurie Betting is the Chairwoman of the Renovation Committee for the Union project and said the One-Stop office will be ready Homecoming week in October.

The proposed office took the place of the Federal Credit Union, which has moved to the lower level. It will offer services such as class registration, financial aid management, parking services and more.

“The space is going to be very inviting,” Betting said. “It’ll be like Apple stores when you walk in. People will be walking around and be able to provide information or services.”

University officials proposed this addition to campus about a year ago. They looked for funding from the McCannel Hall fund and went to Student Senate to get support.

Senate was initially cautious about using $2 million that was intended to renovate the Union. Senate passed a bill allowing the use of the funds as long as the university agreed to cap the following year’s tuition increase at 3.72 percent.

UND said it could not promise that, as tuition increases are managed through the North Dakota University System.

The bill eventually passed with the condition that the university make annual reports on the success of the One-Stop office.

“It will be a place to get students started and make sure you have the necessary tools without trudging across campus,” Betting said.

Student Senate also authorized funds to be put toward the big project in the basement of the Union at the end of last year. The gaming and television area downstairs is being remodeled, while businesses remain vacant. The study area in the southeast corner of the lower level  also is under construction and inaccessible for student use.

The construction will be worth the wait, according to Betting, who said a survey done within the last several years expressed a need for more interactive study space on campus.

“We are just so excited about this,” Betting said. “It will meet a need students have told us is there. The Union is the heart of campus, and this will give another purpose to the Union.”

Students have been part of almost every step of the new study space, which will offer areas for isolated studying, collaboration and small and large group studying.

“This project is a way for Student Government to give back to students,” Student Body President Tanner Franklin said. “It is impactful and visual and a space several other universities around the country that are about the same size as UND have.”

Franklin said he visualizes the Union as the one place dedicated to students on campus. The new study space, One-Stop Student Services and other renovations in the Union do just that, he added.

Other businesses moving around the Union include the Multicultural Student Services into space on the third floor, the Center for Instructional Learning and Technologies from third floor to lower level and the Athletic Ticket Office from lower level to first floor.

“Students are going to see more opportunity — especially in the lower level  —  for studying, gathering and social interaction,” Union Director Tony Trimarco said. “It will be a big positive impact for students.”