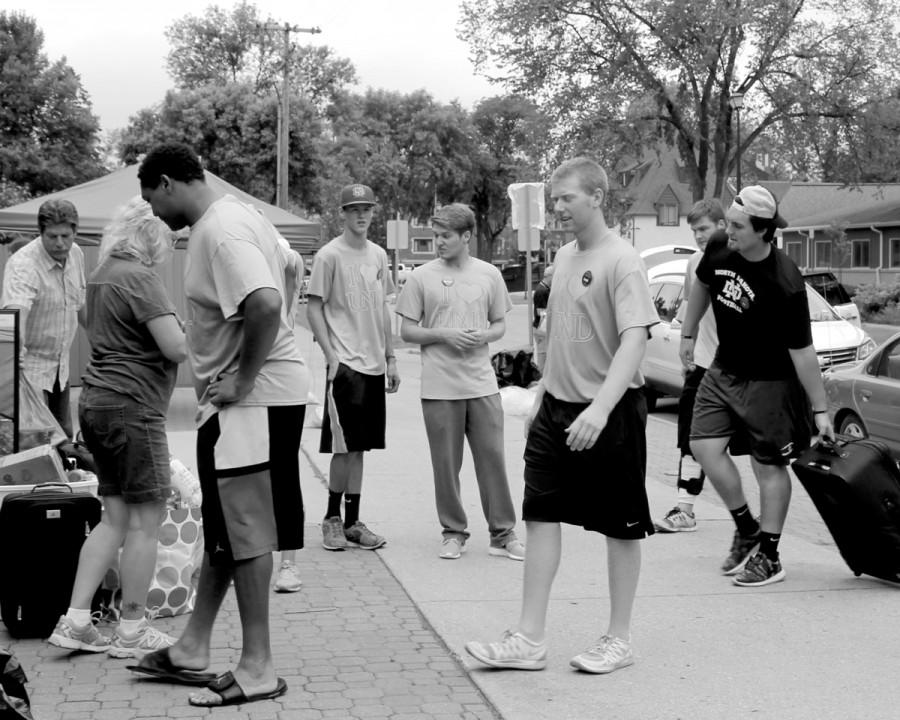 Freshmen Jacob Holmen (front right) volunteers his time with other student athletes and members of UND groups and clubs last Saturday at Squires Hall. The students assisted in moving new students into their residence halls. Photo by Jennifer Friese for The Dakota Student.

They spent the rainy morning in practice — less than a week away from the start of a new football season.

A two-hour break in the middle of preparation might normally have been spent a different way, but the hectic move-in day last Saturday provided the football squad with an alternative way to volunteer its time.

And it was spent with a purpose.

Along with dozens of student athletes at UND, they carried heavy refrigerators and boxes up countless steps in the residence halls. Continued thanks from new students who were about to enter unfamiliar territory and eager parents who said goodbye to their first child off to college echoed throughout campus.

Student athletes volunteer their time each Welcome Weekend to assist with move-in with volunteers from many UND student organizations and clubs.

For freshman Jacob Holmen, watching students open their car doors to enter a new time of their lives was all too familiar as he was in the same position just weeks before.

Though the team moved in early for fall camp, Holmen is still new to the town.

“It’s pretty cool,” Holmen said. “Just meeting new people who are in the same situation as I am.”

“I did it last year, so I helped people in McVey,” he said. “It’s not too hard. You get to meet new people, and it’s a good experience. It’s good to get out in the community and show some support for everybody. It’s a lot easier when you have help, rather than trying to figure everything out yourself.”

Beyond the help offered from football players, athletes included students from softball to basketball to various other sports teams. They see the support they receive on the field and on the court, and Saturday was one opportunity for them to express their gratitude.

“It’s important for student athletes to volunteer because the students do a lot in supporting us out on the field,” freshman Adam Stiner said. “And it’s important for us to give back to them and show that we support them as students.”