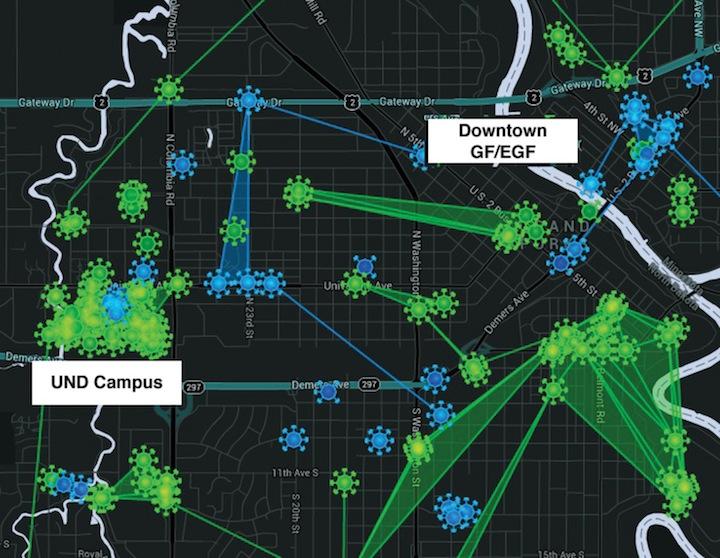 Ingress territory map of Grand Forks showing the divide between campus and downtown.

The two busiest areas in Grand Forks — the UND campus and downtown — are being fought over in an online battle.

The smart phone app divides users into two teams — the Enlightenment and the Resistance — that battle over real cultural landmarks, known as portals, such as the Chester Fritz Library.

Users believe Google started Ingress as a way to have ordinary people find and submit data for them.

“The portals are created by users,” UND student Chester Beltowski said. “What constitutes a portal is anything that is culturally significant — churches, artwork, sculptures, historic buildings.”

Users must physically travel within 40 meters of the portals in order to capture them. The goal of the game is to claim and connect portals, thus capturing mind units. The worldwide battle between the Enlightenment and the Resistance is scored in terms of mind units.

Like many games, Ingress also has a social aspect.

“In order for you to get anywhere in the game, you need to be social with the other people playing,” Beltowski said. “I have gone all the way to San Francisco to play the game. Google put on an event, and said ‘Everyone meet here, and let’s see which team can capture more stuff.’

Beltowski has become friends with other UND students through Ingress, including student Amber Bouret, who is part of the Enlightened team. He said while he was playing he noticed another user claiming portals on campus and chatted with her. Bouret said she is not as involved in Ingress as she used to be but still finds time to play.

Beltowski also was able to connect with masters student and Ingress enemy Kyle Goehner. Goehner has been playing since January 2013 and has noticed an increase in players in Grand Forks since then.

“One aspect of the game that initially intrigued me was the anonymity, especially while playing on campus,” Goehner said. “You begin to feel as though the person on the other side of the sidewalk could be another player and is trying to take down the portal you just built. With all of the students texting and checking updates on their phones you never know who could be the other Ingress agent.”

Goehner estimates that roughly 40 people are playing Ingress in Grand Forks. The Enlightened team currently dominates the UND campus, while the Resistance currently holds downtown, but Ingress players are constantly battling over these areas.

“It stings, because I did six hours of work the other day, and they are going to destroy it, but that’s part of the game,” Beltowski said. “I fully expect them to do it.”

Bouret said the beauty of the game is that users can choose to be as involved as they want. Some, like Beltowski, travel long distances to capture hard to get portals, while others simply play on their commute.

“Lately, I have been playing mainly while on walks with my dog or on my commute to the school,” Goehner said. “I do enjoy the group play, and highly encourage new players to reach out to the community, as it can really make the game come alive.”

Editor Note: Chester Beltowski is the photo editor of the Dakota Student.

Sam Wigness is the features editor of The Dakota Student. He can be reached at [email protected]