'Last of the Boys' drama is suspenseful, heart-felt and will have you wondering the whole time 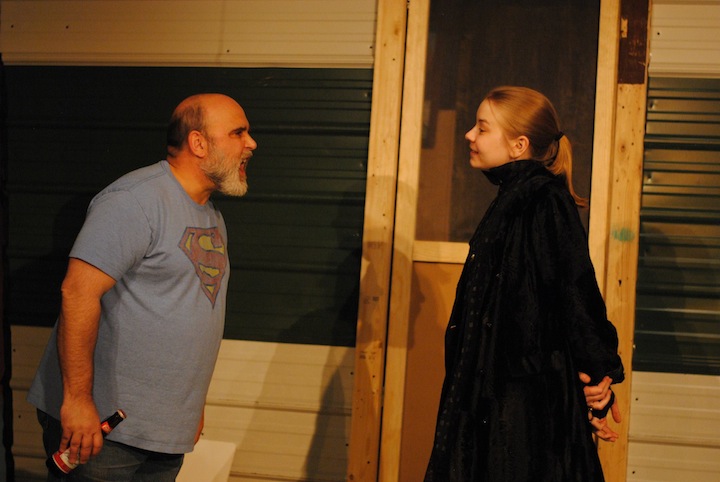 The Greater Grand Forks Community Theatre displayed war drafts, military war stories and live music in its performance of the “Last of the Boys” Friday night at the Fire Hall Theatre. The play follows Vietnam War veteran Benjamin Lee Holloway (Rob Howard) dealing with the struggles of his life during the war and how it affects his current situation.

While audience members found their seats, a man played country songs on guitar and harmonica and continued to do so during the show. This added to the overall performance because it set the mood for the play before it actually began.

At the beginning, director Kathy Coudle-King introduced a First Gulf War veteran to read a monologue he had written himself during the winter’s writing program “Warrior Words” that the Fire Hall Theatre had previously held.

The monologue read by the veteran was sad, and it helped the audience understand the meaning of the play. Since the play was a drama, the veteran’s piece helped to set the tone for the show. I have attended plays at the Fire Hall Theatre before, but this was a first. It was definitely an added bonus to the performance.

Even though the live music and war story at the beginning were huge parts of the performance, it wasn’t my favorite part of the show.

The Fire Hall Theatre has never disappointed me with its sets, and this set was better than most. It was the most realistic I have seen. The walls were layered with a beautiful backdrop of the woods, and the floor was covered with sticks and dirt.

Not only were all the walls and floors covered, but there was a real camper, a smoke pit (and a smoke machine to add effects to the fire), and it even smelled like a campfire.

The camper and woods set was the only one used during the play, but it was perfect for every scene. Benjamin Lee Holloway, the main character of the play, gave a great performance. The camper was his home, and he didn’t want to give it up, even though all of his neighbors had sold their properties and moved away.

Of all the characters, Salyer was my favorite. She was a dark character who remained mysterious all the way until the end of the show. Although she looked like a rebellious teenager with an older boyfriend, Salyer was really a 30-year-old woman. It was hard to picture her as such because she was played by a younger actress, but Caballero was able to capture the part.

The relationship between Salyer and Jeeter was awkward, but that is probably because he looks a lot older than her, yet he acts a lot younger than her.

One of the only things I didn’t like about the performance was the little fight between Salyer’s mother Lorraine and Jeeter. It seemed really staged and threw me off. If this part of the play would have been different I would have loved the show even more.

The play had two acts and felt rather long. During the intermission, Coudle-King pulled up a chart that listed the old draft dates, and when we all would have been drafted based on our birthdays (and if we were all men). This was really neat, and I loved that they incorporated this part of war history into the show.

The last act of the play was by far my favorite. It was the most suspenseful and had me on edge the whole time. It answered all of the questions that emerged in the beginning of the play.

Overall I would give this play a four out of five stars because the fight scene and the lengthiness were drawbacks. However, the emotion of the play, the set, the story and all of the added bonuses by Coudle-King made the play definitely worth attending.

Additionally, tickets were only $10 and money was donated to the Fire Hall Theatre for tickets for veterans and military personnel to see the show for free.