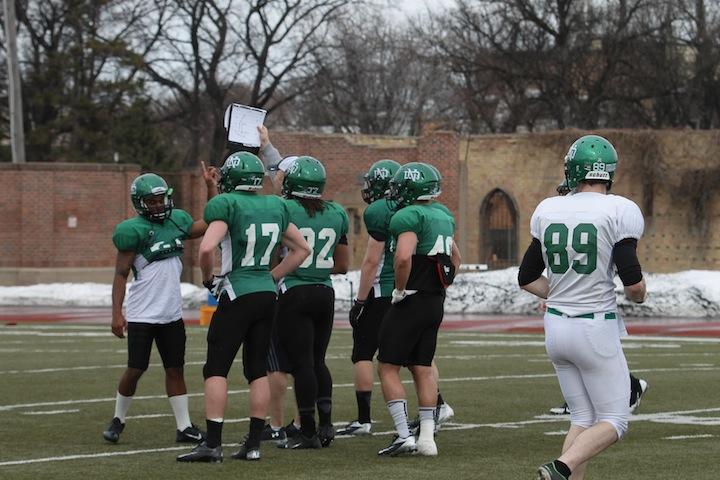 The UND football team practices outdoors to prepare for the upcoming season. Photo by Jennifer Friese.

After months of indoor practices and training with no games, the UND football team prepares for its first and only spring football game.

This year will be different as there aren’t enough players to divide into a green team and a white team, but coaches still expect to get a feel for where each player is in his training during Saturday’s 1 p.m. kickoff at the Alerus Center.

“We’re still going to be able to evaluate our guys,” UND coach Bubba Schweigert said. “We want to see what our guys can do and really how offensively — how we work together; and each individual, how they execute their assignments and skills; and defensively — how we tackle and open space. We’re looking at each individual, but also how they fit into the team aspect of our football program.”

The group has been split up in recent weeks of practice to focus on specific areas of play, and that’s what it will look at during Saturday’s simulated game by having what the coaches are calling “live sessions” and not an actual game.

These sessions will vary from red zone opportunities to different third-down yardages and goal line work.

Special teams coordinator and tight ends coach Shawn Kostich said the biggest thing for him is getting the team to find its identity by the time end of spring.

“We’ve got to figure out what are we good at, what are we going to hang our hat on, and that’s really what we’re trying to do here right now,” he said.

One of the main challenges for the team right now is its shortage of players, which is the big reason UND will not be able to split into two teams for this year’s spring game.

After losing three of its top wide receivers, UND looks to a group of younger men to step up. Despite the returning receivers all being underclassmen, Schweigert says he doesn’t care about their age.

“The good thing about young teams is they’re eager to learn,” he said. “The age and year you are in school really doesn’t determine what type of player you are.”

Kostich faces similar issues in working on the team’s kicking game, as he has been coaching the group without having a key player: the kicker.

As for the team’s kicking game, Kostich says they’ve been hitting fundamentals hard, so the players know what they are capable of before their final teammates come.

When talking about what he wants from players in general game play, running backs coach Kevin Maurice agrees with many of the other coaches, saying he doesn’t expect to see one stand out performer but rather a group that works together.

“I’d like for them to work collectively as a unit, because not one of them is going to be ‘the guy’,” Maurice said. “However, once we work as a unit, I think it’ll carry over onto the team.”

Despite the lack of players, several members of the team are optimistic about the upcoming season and happy to get outside on the field at all.

“It’s been really nice, you know, it’s just a new life working with these guys … you know we’re a team, we all have a position on this team,” junior running back P.J. Sparks said. “It feels good to get back, you know we’ve been going through a grind, lifting and doing all that, but there’s nothing like being on the field with those guys.”

Fellow running back Jer Garman said he agrees and that it’s been hard adjusting to a new way of running the game, but that’s the way it goes. “It’s interesting,” Garman said. “It’s difficult learning a whole new offense. It’s different terminology. I mean, we’re just playing football though; you’ve got to understand it and keep playing.”

The junior also expressed some concern about the team’s breadth at this point in time, but remains positive.

“We really don’t have a depth chart set right now,” Garman said. “We’re all just working really hard, helping each other out, because we’re all learning the offense the same.”

In past years, it has been rare to see the student section filled during games, but sophomore linebacker Dayo Idowu says he thinks that might change soon.

“I’m sure the fans will be able to expect something different, just our emotion and our desire during the game will be a lot different, and I’m really excited for that,” Idowu said. “I feel like everybody’s really trying to get better.”

With the pressure of new players joining in the fall, players are working harder now in an effort to secure playing time.

“Some of the guys we’re bringing in, we expect them to compete for some spots, so that’s why we’re encouraging our guys to keep the focus on what they can control,” Schweigert said. “That’s the amount of effort and the amount of time put into improving athletic ability and doing a good job in the classroom.”

After Saturday’s game, the team will continue working to recruit more players while also making progress with the hard at work teammates, who have been practicing together all winter.

Schweigert knows whoever does join the team in August is going to have to adjust quickly.

“These last few guys, they’ve gotta be guys that can come in and help us right away,” he said.