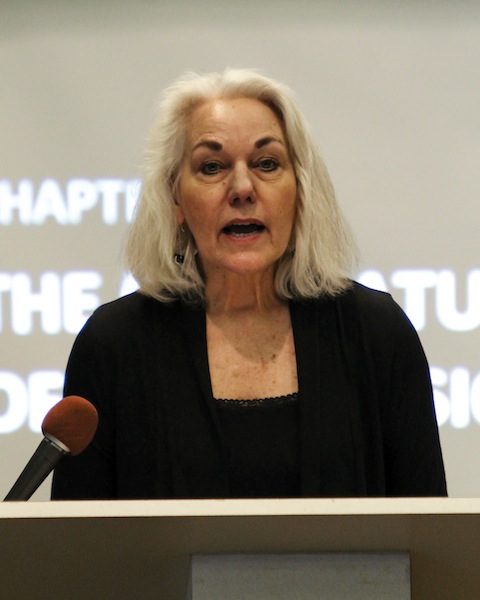 Pulitzer Prize winning journalist Jacqui Banaszynski opened the annual Hagerty Lecture with real stories from her past and the journey she has taken to become the journalist she is today.

The lecture took place Thursday night in the Grand Forks Herald Community Room, where Banaszynski focused on compassion and caring in journalism and how she found “the courage to care and the faith to believe.”

Banaszynski is not only a 1988  Pulitzer Prize winner, but she also a professor and Knight Chair in Journalism at the University of Missouri School of Journalism. She has been a journalist for 30 years.

“I really believe in this, and I believe in the value of it, and if people want to hear about it and are gracious enough to say we will listen to you, then I will go,” Banaszynski said.

According to Banaszynski, compassion and caring in journalism is important for readers to understand that journalist don’t always like what they have to do, but it has to be done.

“She puts the lie to the notion that all journalists are cynical, uncaring, heartless vultures who feed off bad news,” retired journalist Chuck Haga said. “In fact, most journalists that I have worked with or competed with have hearts, and you can’t help but be affected when dealing with the parents of a child who’s been killed, for example. Those stories need to be told, and it’s important that they be told by people with sensitivity.”

When deciding what to talk about at the lecture, Banaszynski said she had talked to UND professor Richard Aregood to figure out who the audience was going to be and what it needed to hear.

“Because so many people have presumptions or attitudes about the media and the press, I like to say, ‘wait a minute; we do care about what we do,’” Banaszynski said. “You might not recognize it because we have to do things people don’t like, but we care about it. And I wanted to not just tell war stories, but to sort of have a message that this matters and you have to find a way to respect and honor and keep journalism alive.”

Junior Kelsey Knox wasn’t expecting to learn about true “war” stories of journalists and things they have to go through in order to get the story out to the readers.

“I thought it was pretty neat. I was originally expecting it to be associated with Native American culture, because it’s ‘Time Out Week,’ but I was surprised by how entertaining it was,” Knox said. “I really liked how she wrote about the gay men. I think it’s really neat that she took enough time and energy to convey that it is okay to be gay. I mean, the whole thing was pretty cool.”

Haga found importance in her talk of how maintaining a staff of professional storytellers — people who have standards and abide by those standards — is important.

“There are a lot of people who think they get all the news they need from a few blogs or maybe TV, but most of what they skim (initially) came from newspapers to start with and were stolen,” Haga said. “If newspapers all shrivel up and die and go away, what is going to take their place? So, it’s important that the craft be sustained.”