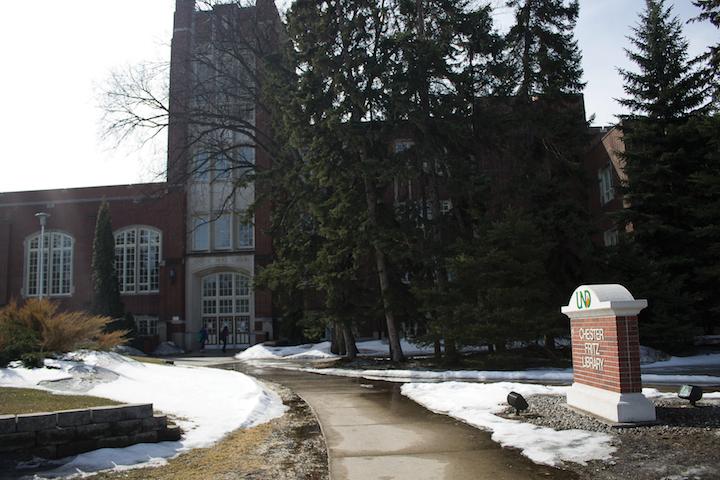 After students and faculty expressed concern over UND’s Chester Fritz Library potentially losing resources, university Provost Thomas DiLorenzo has clarified several points of misunderstanding and promised there will be no reduction in the library’s resources.

“Whatever the deficit is, I’ll find the money,” DiLorenzo promised in a meeting addressing the library’s struggle for funding. “I always planned to find the money.”

In the last couple months, students and faculty have become increasingly worried about losing library resources.

This prompted history doctoral student Cody Stanley to organize the Save the Chester Fritz Library group in the attempt to spread awareness.

He also continues to get signatures on a petition calling for two goals: That the provost find the money to keep the library at the same level next year as it is this year, and that students get a serious voice in the future direction of the library, which should include an increase in its budget.

“We’re really advocating for the administration to be accountable for this and to listen to the students,” Stanley said. “The one thing I’m pushing to everyone is, this is a public university. If you’re a North Dakota resident, this is your university. This isn’t the administration’s university, and you have the right to a properly funded research library.”

Stanley is one of the many students who use the library frequently, and says he feels a reduction in intellectual content would be detrimental to his terminal degree.

“I use the library on a daily basis as a history student,” Stanley said. “My life is researching books and scholarly articles; the key word is scholarly. All of the important, peer-reviewed information out there, the vast majority of it, isn’t free and on the Internet. If you want the real information with value, you have to go to the library … This sort of thing affects the intellectual content of one’s degree. The weight that our school’s name has is going to be reduced.”

Another activist in the Save the Chester Fritz Library movement is undergraduate student Kristof Nelson, who says he heard about the potential reduction in funds from a professor, and has been involved ever since.

“One of my history professors said at the beginning of the semester that the library was facing possible cuts, and it made me pretty mad because I’ve been doing a lot of research in the library for my senior thesis capstone,” Nelson said. “That’s how my involvement started, was hearing all of the faculty concern. They said cuts would hinder their ability to conduct research, also, starting up my senior history project, as well, this is concerning to me.”

The Save the Chester Fritz Library group has almost 750 likes on Facebook as of Wednesday and also has a presence on Twitter, allowing students to stay up to date on signature numbers, meetings and other information pertaining to the library.

Wednesday afternoon, DiLorenzo met with some of those concerned about the library, including Nelson and Stanley, who brought with them just under 400 signatures on a still growing petition.

In the meeting, DiLorenzo covered a variety of areas, saying there isn’t just one reason for the struggle for funds.

There is a number of ways in which the university has attempted to save the library money in order to keep it from facing cuts in its intellectual content. Holding onto funds in savings accounts, leaving vacant positions unfilled and cashing in on endowments are strategies the university has put in place, according to DiLorenzo and UND spokesman Peter Johnson.

Although these steps do save money, the administration is still coming up short.

One place to find that money could be from alumni. But director of the library Wilbur Stolt said part of the issue in getting funding from alumni is conveying to that older generation that online access is a vital part of research today.

“The cost of some of the electronic resources we get can be thousands of dollars,” Stolt said. “We have to continue to make that case, but how people remember the library is so much different to many of the alums, so bridging that gap and making our case is a continual challenge.

Many students have questioned the administration’s ability to allocate funds properly, with the expansion of the law school, the groundbreaking for a new medical school and the building of a new athletics facility. But DiLorenzo and Johnson said the funds used for these projects were not produced by UND directly. The medical and law schools are being paid for by allocations from the state, while the new athletics facility is, in fact, supported by alumni.

However, the $29 million summer overhaul of Wilkerson is being paid for with funds that could have gone to the library.

“We have many needs across the university,” DiLorenzo said. “We can have a magnificent library and absolute awful other pieces, and students wouldn’t come. So it’s a balancing act.”

Addressing the widely-held idea that the university is paying for an necessarily large number of administrators, the provost said that’s not the case.

“It just is absolutely untrue,” DiLorenzo said. “But we’ve been working with a consulting firm right now who told us in their experience in working with many universities, we’re the leanest group in the country.”

In fact, DiLorenzo said he has taken extra steps to keep the number of vice presidents, associate vice presidents and other administrative positions to a minimum by facilitating interaction between faculty, essentially working together.

Going forward, the administration is looking to continue collaborating with students and faculty in making decisions in the hope that the future will be brighter and more sustainable.

“We’re going to take the recommendations of the working group and continue this process of having students and faculty involved to make decisions about what do we want the library to look like for the future,” DiLorenzo said.

Dakota Student editor-in-chief Will Beaton contributed to this story.