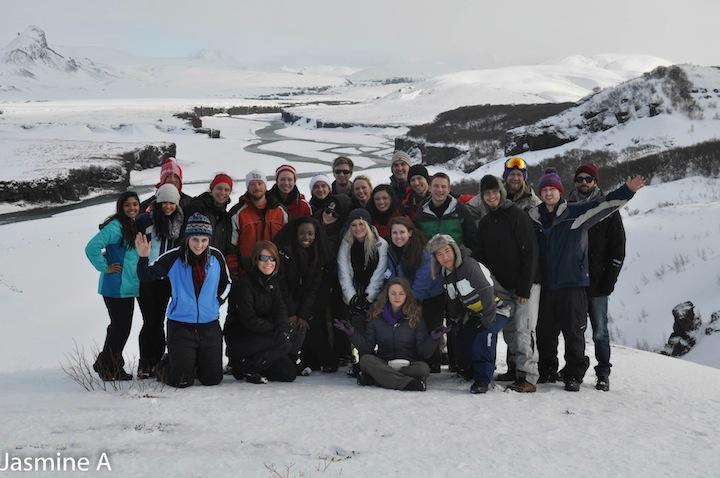 GREEN program students sit atop a mountain in March in Iceland. Photo courtesy of Facebok.com.

UND students Alex Wilson and Taylor Storley spent spring break in Iceland, which, despite its name, was warmer than Grand Forks.

The duo wasn’t taking the week off to catch a tan; their trip was with the GREEN Program, a national organization that combines the features of traditional internships with study abroad programs to help students advance careers in green energy.

“Study Abroad is pretty difficult to correlate with the courses that UND requires,” Wilson said. “So they kind of created this program to get a Study Abroad without necessarily taking the academic hit and setback.”

Wilson and Storley were accompanied by 24 other engineering students from colleges including Rutgers, University of Iowa and University of Wisconsin.

“Everyone was from a different discipline of engineering and everyone really came with different perspectives,” Wilson said.

As a petroleum engineering major, Wilson is aware his discipline is a non-green one, but made it his goal to become as cross-educated and cross-connected as possible on this trip. He said he hopes to spark collaboration between oil and green energy companies and help them share technology.

The GREEN Program helped Wilson take steps toward this goal through networking and field experience.

“Learning, in theory, is always great — there is nothing wrong with it,” Wilson said. “But it is so different seeing it in a classroom than when you get to see it being applied. (The program) laid out their expectation of us on the very first day. They made it clear that we were there to learn (first), and then we were there to go on adventures as well.”

Wilson said he became friends with the other students on the trip, and continues to connect with them through a Facebook group.

“I believe it is very important, me networking with all engineers and people with the same aspirations and goals,” he said. “It’s really creating a network that could be very strong for the future.”

While the trip was academically and professionally focused, the group went mountain climbing to hot springs, camping and went behind a waterfall.

“We never really stayed in the same place more than one night,” Wilson said. “We were bouncing all over the island and did all sorts of things.”

Just getting to Iceland’s capital, Reykjavik, was an adventure. The GREEN Program tries to make study abroad trips as cheap and efficient as possible, so Storley and Wilson drove to Winnipeg and flew to Saskatoon, Edmonton and then on to Iceland’s main international airport in Keflavik.

Once in Iceland, the students were split into groups and worked on capstone projects for earned academic credit. They also attended lectures at the Iceland School of Energy master’s program and were granted access to world leading green energy facilities.

By the end of the trip, Wilson was nominated as an ambassador to Iceland by the chancellor of UND.

Mathew McKay is a staff writer and Sam Wigness is the features editor for The Dakota Student. They can be reached at [email protected]