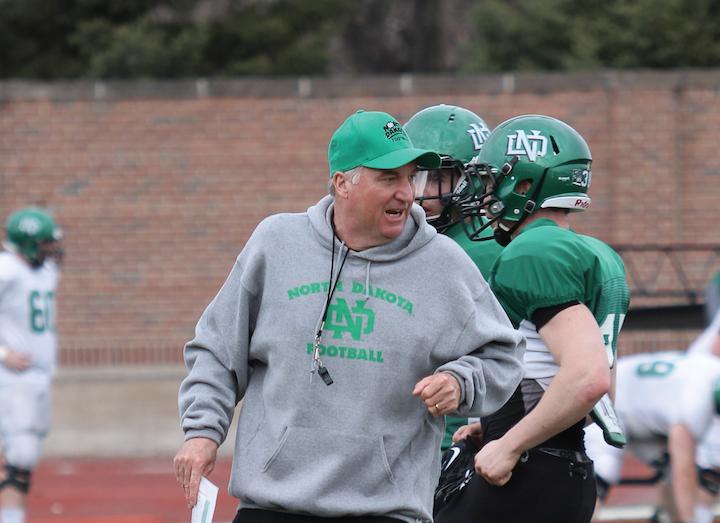 It was like the first day of freshman year all over again — not just for the first-year players on UND’s football roster, but for veteran seniors who had already spent years with a program that grew to be a part of them.

A rising energy level and building enthusiasm were carried into the following days, but Schweigert expressed before his team hit the field that each player would be working for their spot in the lineup.

“No guarantees for the guys, just an opportunity to compete for playing time,” he said. “We’re starting with a blank slate for everybody.

“I told guys if they have one break in this program, it’s right now. All positions are open and everybody is going to earn their spot and earn their playing time. That’s the culture we need to create here — to be a team that reaches the top of the Big Sky. Everything has got to be earned … nothing is going to be given to you. You’ve got to earn it.”

While Schweigert hired many new faces to his staff, Danny Freund is one of two familiar coaches carried over from the previous staff. As a former UND quarterback, Freund is tackling new challenges as he acts as the wide receivers coach.

It’s only a few weeks into the spring season, and Freund has already seen much potential from the players and their reaction to a new routine.

“The big thing this spring, like coach Schweigert said, is to get better every day,” Freund said. “Every day we come out here, we need to improve on something and get better from the previous day. The guys are bringing a lot of energy and coming to work every day.”

It’s a far look ahead to August, but the coaching staff is staying persistent in improving and learning about its players.

In the midst of the learning process, Schweigert hopes leaders will soon start stepping up.

“The leadership will start showing,” he said. “Obviously we want to look to our guys that play a lot … but we’ll take leadership from anybody. Everybody is responsible for some type of leadership.”