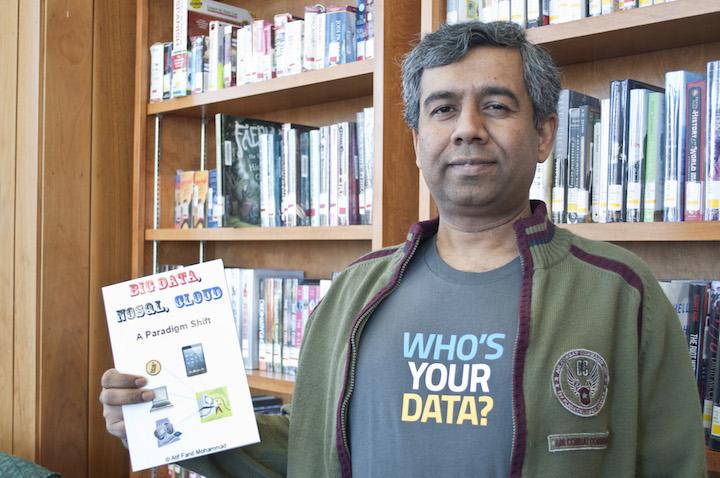 Mohammad is in the progress of writing a third book called “Big Data, NoSQL, Cloud.” The book is similar to his last book, which he published in November 2013, but he said the new one goes further in depth regarding the way people use technology.

Through his writing, Mohammad said he hopes to make people more aware of the loss of privacy they have on computers and how much we truly depend on machines.

“You wake up, go to the microwave and place the things in,” Mohammad said. “It records the data that you used in the microwaving process. You go to a coffee shop and buy a certain coffee. Swipe your card, and it is also data.”

Mohammad said while many students may not be thinking about what they are putting on their profiles right now, they will when applying for jobs later on.

“10, 20, 30 years in the future when they are actually standing in front of somebody interviewing for a reasonable position, the topics will arise and haunt them,” Mohammad said. “‘Oh, you were drinking when you were under 21 at UND? How can we trust that you are not going to break any laws or go against our policies?’”

Mohammad said he uses technology like a lot of other people, however, he believes the biggest difference is that he is careful with what he puts online and any program.

Leading up to his publication in November, Mohammad had the opportunity to speak about data and computing at Colorado State University in Fort Collins, Colo.

In addition to the trip to CSU, Mohammad also spoke at the South Sound Technology Conference at University of Washington and the Washington Technology Forum in Seattle.

Aside from his extensive collegiate work, Mohammad recently started a writing workshop for children at the Grand Forks Public Library after helping his nine-year-old son publish a book about going fishing.

Although he himself does not instruct the workshop, Mohammad said he accompanies his nine-year-old son who inspired him to set it up.

“I helped my son write a book,” Mohammad said. “He told me a story when we were driving back from Winnipeg, Manitoba, and when we came back I asked him to write it.”

Mohammad said after his son was finished, he sent the book to a publisher and it got published. It is now in the Grand Forks Library.

Just as his son accomplished getting his own thoughts out on paper, Mohammed encourages both students and faculty members to write their thoughts in book form, saying many changes and lessons are started with a book — as is the case with a driver’s handbook.

“If you go for a drivers test, you must read a driver’s handbook,” Mohammed said. “Otherwise you would fail no matter how many times you have driven with someone.”

Mohammed said in order to have that handbook someone had to write it to begin with. The important thing is to get thoughts and ideas out to others using a safe direction.

“Anyone can have a hypothesis,” Mohammed said. “It can not be proven right or wrong.”