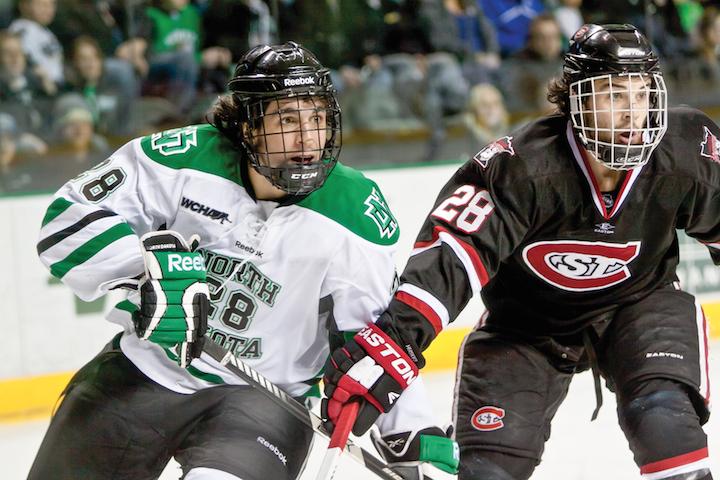 Junior Stephane Pattyn skates in a game earlier this season. The junior will be making his first collegiate Frozen Four appearance this Thursday. Photo by Keisuke Yoshimura/The Dakota Student.

Three years ago, the team that was supposed to win it all found no consolation prize for its pushed-aside celebration after clinching the MacNaughton Cup, or its reserved reaction to the Broadmoor trophy — the only victory that season would be the game that never was.

The seven seniors on the 2010-11 roster all had the same goal, and their 32-9-3 record was cut short after losing in the semifinals in the Frozen Four. They never considered the result an option.

Dillon Simpson was a freshmen skating in the shadows of a veteran team at the time. He didn’t play in that game, but took in the atmosphere and studied the mindset of his teammates.

That was the last time the senior found himself on one of the top-four seeded teams in the nation. This year he is leading North Dakota in much the same direction in hopes of turning a team touted as an underdog into one that has the potential of raising an eighth national championship banner.

“I took a lot in that freshman year at the Frozen Four,” Simpson said. “It was a very veteran team. We were definitely the heavy favorites going in. For me, going into this year, me and (Derek Rodwell) have taken the lessons we learned that year and take them into this time around. You’ve got to embrace the opportunity and do the best that you can with it.”

This Thursday, the unavoidable butterflies that accompany a game of such high-prized stakes and a ticket to the championship game are rightfully so in the midst of a rivalry game to determine the makeup of Saturday’s Frozen Four final.

Minnesota and North Dakota will meet at 7:30 p.m. on Thursday evening, one team finding itself in the highest stage of college hockey and the other watching its season come to an abrupt end — the latter all too familiar for a UND team in a 14-year drought of hoisting a championship trophy.

Yet the pressure of redeeming itself after a 2-0 loss to Michigan three years ago doesn’t change how this team will prepare if its 25-13-3 record is any indication of how it went about salvaging a once-broken, slow start of the season.

“I don’t know how much of an effect that has on anything,” UND coach Dave Hakstol said. “We were unable to do that on that particular night (in 2011). The scenarios are much different and absolutely nobody would pick us to come out of this game and still be alive on Friday morning, yet I said it going into the regional: we are what we are as a team — we know that. We embrace it. Nobody is going to run from the challenge at hand.”

It’s a team that clinched a Frozen Four berth thanks to a goal from a third-line walk-on in double-overtime in a regional final.

“I’d say that’s accurate of our team, though, right?” Simpson said. “We’re a team where nothing comes easy and different guys have had to step up along the way, and it’s only fitting that guys like that get the goals that get us into the Frozen Four.”

Connor Gaarder had just one shot on goal during the March 29 Ferris State game. It found the back of the net and signaled an eruption of the North Dakota bench that would soon be traveling to Philadelphia to continue its season.

Simpson was with a powerhouse team in 2011 that seemed to find all the right bounces, but the ups and downs this season aided in creating to a team nothing short of one motivated and believing it’s capable of more.

“Every experience helps you build and grow and develop, so I’m sure they walked away from that experience with some things that they learned,” Hakstol said. “But I think with this, it’s a small group of seniors and what I’m seeing in them is they’ve got a real desire to take advantage of every opportunity. I don’t think this group is taking anything for granted. They’re not looking too far ahead, yet they’re not putting too much pressure on themselves.

“I just think they’re enjoying every moment, they’re trying to take advantage of it and they’re having a hell of a lot of fun along the way.”

Elizabeth Erickson is the sports editor for The Dakota Student. She can be reached at [email protected]