UND track star breaks her own record by over one minute 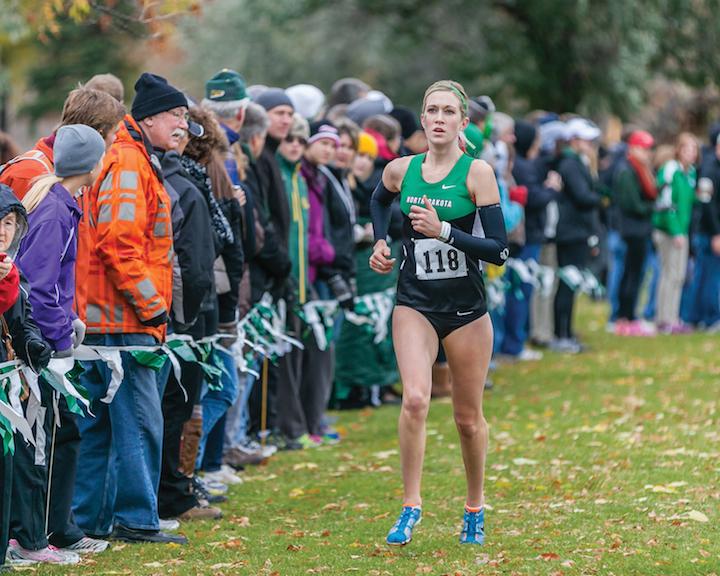 UND distance runner Lydia Lutz recently set a new personal record in the 10k at the Coastal Carolina Shamrock Invitational with a time of 38 minutes, 18.02 seconds.

Lutz chopped over a minute off of her previous record to come in sixth place at the meet.

“My coaches were super excited, so I kind of got some of their energy,” Lutz said. “(The last 400 meters) really hurt, but I just knew that I had to push through it and keep running faster so I could get a (personal record).”

Lutz, a sophomore at UND, has been running since she was in fifth grade, but has always been into the longer races.

“I’ve always been a distance girl, so I have no fast twitch for sprinting” Lutz said.

“I kind of always followed her, and my parents were always pretty active,” Lutz said. “Then she got into running, and I kind of just followed her.”

A Park Rapids, Minn. native, Lutz is used to cold weather, but  she still gets frustrated by North Dakota winters. After worrying she wasn’t ready for her 10k in Carolina, Lutz was pleasantly surprised.

“It felt awesome,” she said. “This winter was really hard working out-wise because it was so cold, and we were always on the roads, so going in I really didn’t know how it was going to go. I didn’t feel ready for it at all, so I’m super pumped.”

When it comes to performing in the classroom, Lutz proved herself a dedicated student right away. During her freshman year, she was named to the 2013 Big Sky Conference Spring and Winter All-Academic Teams. The standout student was also named to the 2013 Spring Semester President’s Roll of Honor.

“It’s a lot of time commitment,” she said. “You have to learn how to manage everything, and I think that being in a sport does kind of help you because it’s like, ‘I have to get this done now,’ it’s not like ‘oh, I have all weekend,’ and so it helps you kind of get your studying done.”

Lutz recently changed her major from biology to community nutrition, but still hopes to eventually make it to medical school.

With plenty of time left in the outdoor season to further improve, the UND track sophomore has set goals to strive toward.

The UND women’s track and field team will compete Saturday at the Dakota Duals meet in Vermillion, S.D.