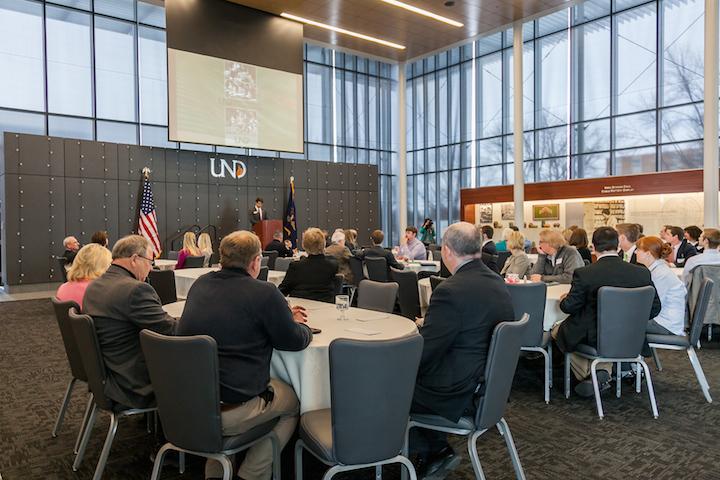 The first Higher Education Day was held at UND on Wednesday in the Gorecki Alumni Center and featured faces from around the state.

There were also other representatives from around the state, faculty, staff and students present at the luncheon put on by Student Government as a way to thank legislators for their support of higher education.

“You have done a lot for UND students, and we are grateful for everything you’ve done,” Student Governmental Affairs Commissioner John Mitzel said.

Vice President for Health Affairs Dr. Joshua Wynne gave a presentation highlighting the new medical school that just started construction. The new building will allow for more students to be accepted into the program, more faculty and staff and the expansion of the residency program. The residency program will take students to rural areas around North Dakota that are not able to replace doctors who are retiring or leaving.

Law professor Paul Lebel and Dean of Law Kathryn Rand also made a presentation on the plans for the addition and renovation of the law school in the coming months. The law school is 90 years old and recently was reaccredited for another seven years with the American Bar Association.

“You can see the existing building,” Lebel said. “It is grand, it is majestic and it screams academia.”

Over the last 10 years, the law program has gained an additional 40 students without gaining new space for professors, students or classrooms. Rand said one of thing that allowed the school to be reaccredited was the plans for the renovation on the school.

University Police Chief Eric Plummer also spoke about campus safety initiatives he has put into place in the last year and a half he has been on campus.

One of those initiatives is the Adopt-a-Cop program that has each residence hall and Greek house assigned a UPD officer as a resource to students living in those places.

Another recent initiative is the vehicle assistance program that started in October. The program allows students to call UPD for assistance if their car doesn’t start or if they’ve locked their keys in their vehicle.

“Since the program started, we’ve helped approximately 200 students and saved them about $10,000 in out-of-pocket costs,” Plummer said.

“I thank you for all that you have done to fight for students,” Creamer said. “But more so, call on you to continue fighting, because we can always do better for students of this great state.”