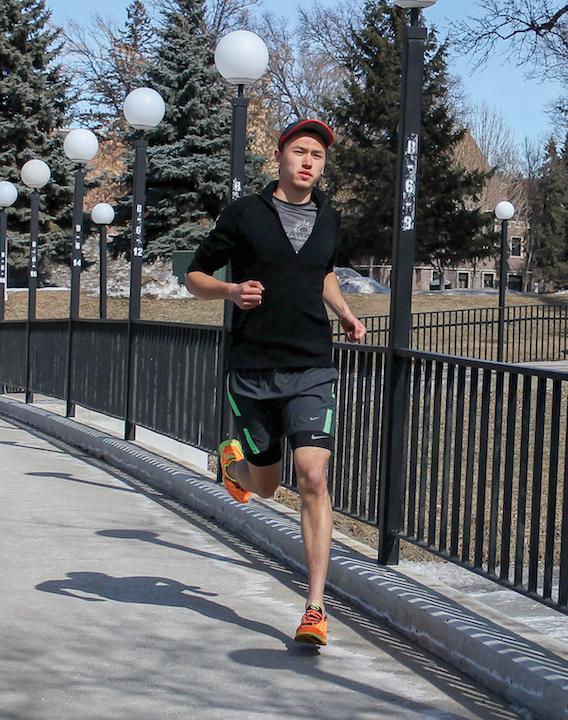 “We’re both North Dakota locals and have a connection with the state, and we like to do endurance stuff,” Kobilansky said. “It’s basically combining our passion for the environment, community involvement and endurance sports.”

Kobilansky and Fisher will run 30 to 60 miles per day for up to two weeks to show support for the preservation of North Dakota’s outdoors and appreciation for extreme endurance running.

Fisher said he wanted to be a part of the journey after Kobilansky pitched the idea and told him the reasons for it.

Kobilansky and Fisher set aside two weeks to complete the expedition, but hope to finish it faster.

“I kind of tend to get too ambitious … I was thinking like a week,” Kobilansky said. “So 56 miles a day — two weeks tops.”

Fisher said two weeks to run the distance is realistic, but the goal of one week will make him push harder.

“One of the more important things on our expedition is that we are going to be filming along the way,” Kobilansky said. “We are going to document everything and interview people along the way to get a new perspective on what is happening (to North Dakota’s outdoors).”

Kobilansky said the expedition wasn’t anything against oil or Williston, but the main mission is to promote responsible energy production.

According to the Bakken Eco-Expedition website, it’s trying to “advocate for the protection of special lands in these times of development,” and raise awareness for cleaner energy resources.

“The Bakken boom is providing a lot of great stuff for the economy, but for this run specifically, it’s really there to create this public consciousness, because a lot of people aren’t aware of what is happening to the environment,” Kobilansky said.

A team of cyclists will join the runners. Kobilansky said  there will be no cars going on the expedition, and the only supplies they will be taking are the ones they carry on their backs.

“The cool part of the expedition is that we’re probably going to be running eight to 12 hours a day, of course with breaks in between, but, for a place to stay, we are going to be ‘dirtbagging’ it,” Kobilansky said.

Kobilansky said if nearby homeowners don’t let them sleep in their homes, they will be sleeping on the side of the road or in state parks.

“I’ve had a little experience doing that, so I’m for sure excited about that,” Fisher added. “It doesn’t bother me at all.”

Although the trip is set, Kobilansky is still searching for ways to fund this project.

“We do not have enough money (for the expedition) yet,” he said. “So that’s our goal right now.”

However, Kobilansky said that once they get enough money for all of their supplies, they will donate the rest to Ground Up Adventures — a non-profit organization that promotes youth involvement in exercise and adventure activities.

“We’ve been talking to a couple different sponsors, and we’re definitely going to need some donations to make the expedition happen in June,” Kobilansky said.