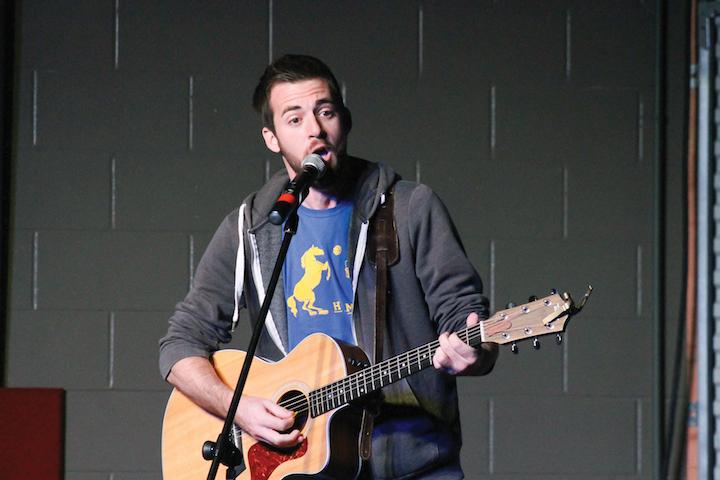 “Chris Jones ended up going like half an hour to 45 minutes longer then he wanted to, just because of the audience,” LeMire said.

While UND’s Nightlife program brings a lot of comedians to UND, LeMire said she would love to see more hypnotists after seeing the outcome of the event.

On Saturday night, comedian Brian O’Sullivan followed Jones with a show rescheduled from last February. LeMire said the group brought in O’Sullivan because his act provided a unique quality to comedy.

“We bring in a lot of comedians, but this is a different kind of comedian,” LeMire said. “He can sing, play the guitar, and he’s funny.”

O’Sullivan started the night with a song introducing himself and then got the night rolling with Taylor Swift’s song, “We Are Never Ever Getting Back Together.”

The audience interacted with O’Sullivan and even had the opportunity to write the lyrics of a short song with him.

Following the event, sophomore Jake Vivier said he had seen O’Sullivan in the past and was excited to see his new songs.

“I really enjoyed his use of improv and thought some of his songs were pretty funny,” Voigt said.

O’Sullivan had to reschedule the performance multiple times, but was able to perform a new song he had put together in the past few weeks.

“I try to keep my impressions new all the time,” O’Sullivan said. “For one thing, I get bored with the songs, and also I make fun of pop culture, which is always changing.”

O’Sullivan said the key to having success in what he does is practice.

“If you like to make people laugh, have people tell you that you make them laugh and you enjoy writing songs, it’s really about practice,” O’Sullivan said. “The more songs you write and the more jokes you write the better you will become at writing in general.”

This weekend the University Program Council will be attending a conference, so nothing is scheduled for Friday or Saturday. The three remaining events include comedian Jay Black on April 11, Teddy Geiger on April 26 and the second annual Spring Jam on May 3.

With only three remaining events left, the group will begin looking for new members to head up next year’s events, starting next week.

“We have a lot of students who are graduating and things like that, so if you want to get involved, you should definitely come into the Student Government office and grab an application,” LeMire said.