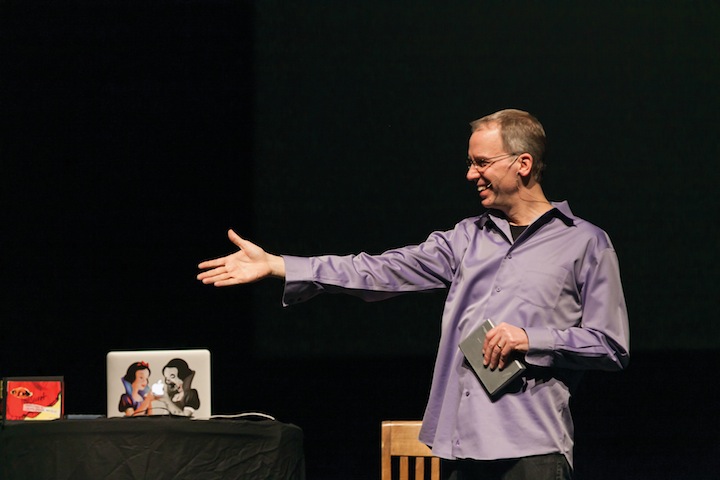 Frank Warren talks on the stage at the Chester Fritz Auditorium about starting PostSecret, a popular website where people post their stories and confessions. Photo by Keisuke Yoshimura/The Dakota Student.

Secrets, stories and laughs were shared by the audience members of Frank Warren’s PostSecret event at UND. Warren, who has been regarded as “The Most Trusted Stranger in America”, started his project “PostSecret” ten years ago. Strangers, who usually remain anonymous, design a postcard based on one of their personal secrets and send it to Warren’s mailbox. He proceeds by uploading the postcards to his website blog, postsecret.com, for the world to see.

“I recognize that I have a rich interior life, and others do too, so I have created a secret place where we can share our stories and inside jokes,” Warren said in a personal interview.

During his show, Warren said the mail trickled in slowly when he first started the project, but it gradually grew into the worldwide sensation it is today. Many of the postcards are carefully constructed works of art, and themes for the secrets include embarrassing moments, fears, desires and obsessions.

“The beauty of the project is that they have to be economic with their message – it’s like making a visual haiku on a postcard,” Warren said.

He published his first PostSecret book in 2005, which contains images of the most interesting postcards he has received. Even though more than 500,000 postcards have been sent to his house, Warren said he is still surprised at some of the responses.

“The most shocking postcards for me are actually from people who are transforming one way or another for love.”

He has published five PostSecret books to date, and a new book titled “The World of PostSecret,” will be released on Nov. 4 this year. A PostSecret play is in the works and will debut in North Carolina this April.

Another accomplishment Warren has made through his project is working with suicide prevention and awareness groups.

“I was a volunteer for years with Hopeline, which is a national suicide hotline, and did a lot of good work there. When PostSecret got big, I wanted to use the website for more. We partnered with IMAlive, a suicide prevention group, and we have raised over 1 million dollars.”

Warren has traveled around the country and the world presenting live events about his project. He visited the Chester Fritz Auditorium on March 25, but this is not the first time he has been to UND. The event was originally scheduled for last December but was canceled due to weather. Warren still made it here, and said that he had a half an hour session with fans that still showed up to the event. Warren has also given his full PostSecret live event at UND before.

“He was here in the past, about 4 years ago,” said sophomore Jake Vivier, Diversity Coordinator for University Programming Council who organized the event. “It was really up to me about bringing him back, because it’s new for students here. The people who saw him last time are now graduating seniors. Frank was a hit last time, so hopefully he will be a hit again.”

Vivier started the work for getting Warren to come to campus a year ago, and said that University Programming Council and Student Government were the driving forces to get Warren here.

In his visit to UND, Warren talked about how the project got started, shared one of his own secrets, showed postcards that were banned from his books, and offered an open mic for any audience member to confess a secret they have been hiding.

The audience was a mixture of dedicated PostSecret fans and people who had never heard of Frank Warren.

“I had heard his name before, but I didn’t know who he was or anything about him,” said freshman Emily Melchior. “I thought he was a really good speaker.”

Freshman Claire Eidenschink also appreciated Frank’s event and said she plans on sending in her own secret. “I haven’t made it yet, but I know what I’m going to say.”

Warren made it clear in his show that nobody is alone in their secrets, and seeing other people’s bravery in sending their secrets has given him the courage to face his own.

“When we think we’re keeping a secret, the secret is truly keeping us.”

Emmy Erbes is a staff writer for The Dakota Student. She can be reached at [email protected]