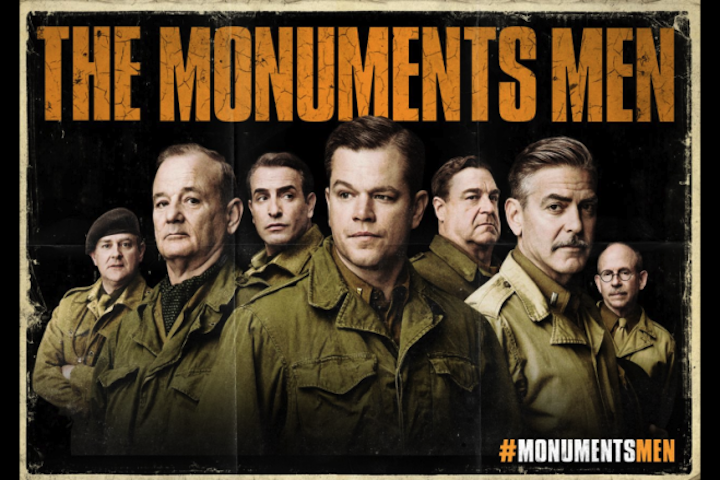 The cast of ‘The Monuments Men’. Photo courtesy of freeenterprise.com

For a war movie, “The Monuments Men” severely lacks battle scenes and bloodshed, but shows a side of the second World War that history books left out.

The film follows the true story of Frank Stokes (George Clooney) bringing a team of museum curators and art historians into war-ridden Europe in search of stolen art. It turns out that during the war, Hitler was collecting and destroying paintings, statues and other manifestations of culture from all over Europe.

As Stokes puts it, “You can wipe out an entire generation, you can burn their homes to the ground and somehow they’ll still find their way back. But if you destroy their history, you destroy their achievements and it’s as if they never existed. That’s what Hitler wants and that’s exactly what we are fighting for.”

With this mentality, the platoon goes through basic training in England before crossing into France just weeks after the invasion of Normandy. They divide into pairs and spread across Western Europe to find and recover priceless artworks including Michelangelo’s “Madonna and Child” and the Ghent Altarpiece.

During their missions, the men face resistance from Allies, who don’t want to be told what they can and can’t bomb, and Nazis, who continue to steal art even as the war is coming to an end. The platoon also is racing against time because Hitler signed an order that all the stolen art will be destroyed if he dies. Soldier Jean Claude Clermont (Jean Dujardin) says “I never thought I’d say this, but let’s hope nobody kills Hitler.”

While “The Monuments Men” is set during the war, only two men die in the entire movie — Donald Jeffries (Hugh Bonneville) and Clermont. Through the lack of death and blood, Clooney, as the director, highlights the cultural impact of art. After Jeffries dies trying to protect the “Madonna and Child,” the question of whether a human life is worth losing over art is raised and remains at the surface until the end.

“The Monuments Men” gets its punch from the star-studded cast. Clooney is great, although he hardly deviates from his clever, composed Danny Ocean character from the “Ocean’s” trilogy. At Clooney’s side once again is Matt Damon as James Granger, who convinces French museum curator Claire Simone (Cate Blanchett) help the team find the stolen art.

The real heroes of this film are Bill Murray, John Goodman and Bob Balaban. Murray and Balaban, as Privates Cambpell and Savits,

play off of each other beautifully. Balaban’s panicked character is grounded by Murray’s dry humor as they fend off a Nazi soldier by smoking cigarettes with him. Murray shows versatility when he sheds a tear in a Christmas Eve scene.

John Goodman weeps in “The Monuments Men” too, after his partner Clermont is shot in a skirmish. As the sculptor-turned-soldier Walter Garfield, Goodman epitomizes a man that will do anything to preserve his craft, and stands out in the A-list cast of this movie.

I will admit, I went into “The Monuments Men” wanting to like it. I am a Bill Murray and John Goodman fan, and I was excited to see them both play serious roles. Whether they tried to or not, Murray and Goodman were hilarious at times, but serious enough to reflect the trying times of war.

I give “The Monuments Men” five out of five stars because of the cast and Clooney’s ability to reveal a side World War II that hasn’t, but should be, understood. Clooney even delayed the release date, and took the movie out of 2013 awards contention, to perfect the final product. No, this film isn’t flashy and fast, but its pace fits the subject matter and tells a story that has largely gone unnoticed.