Basketball team sends off players who left legacy with team 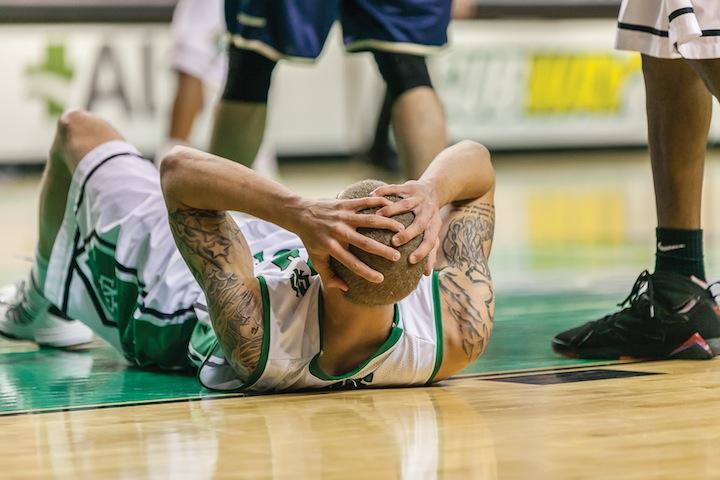 But the one key ingredient in having success on the court is having a strong leader. The UND men’s basketball team was graced with not just one, but an entire senior class of leaders.

Seniors Troy Huff, Jamal Webb, Aaron Anderson, Jaron Nash, Alonzo Traylor, Josh Schuler and even injured Brandon Brekke, all had roles to play in what was one of the most successful seasons in UND men’s basketball history.

While basketball may not be the biggest event in Grand Forks, that did not stop these seniors from trying to take the program to new heights.

To put what this class has done into perspective, the season before it came to UND, the team went 8-23 and had no shot of playoff contention.

Fast forward to this year, and this team looks completely different.

While the team did have one of its best seasons in school history, the season could be described as bittersweet. At one moment, UND would look brilliant on the court, playing stifling defense and dominating teams, but then in the next moment, the same defensive tenacity was nowhere to be found and the ball movement ceased to exist.

The Green and White struggled in the beginning of the season, failing to find a groove against tenacious teams such as Wisconsin, but this team hit its stride when it really mattered — in Big Sky Conference play.

The men’s team finished with 14 wins in the Big Sky Conference, and was on its way to making history by winning its first Big Sky Championship and going to the NCAA Tournament.

But Weber State had other plans.

In the Big Sky Championship game, the Wildcats took it to UND with their size and three point shooting, beating the Green and White 88-67.

While some may be disappointed with the way the season ended, any fan that watched this team knows they watched something special.

It seemed as though every leader had his moment this season, from Jaron Nash’s earth-shattering dunks, to Jamal Webb and Aaron Anderson throwing up great assists and scoring in crunch time, to Troy Huff lighting up the box score and hitting a game winning shot that nearly blew the roof off The Betty.

The role players also had their moments, from Josh Schuler coming off the bench to log solid minutes to Alonzo Traylor locking down the paint, making life miserable for anyone attempting a lay-up. Everyone contributed.

Even though the team is graduating six seniors, Jones has prepared for the future by having younger players such as Quinton Hooker, Lenny Antwi and Cole Stefan gain experience by coming off the bench and playing a large amount of minutes.

While the ultimate goal was not reached, the seniors will leave UND knowing they helped turn a team that was struggling to win games into a championship contender.