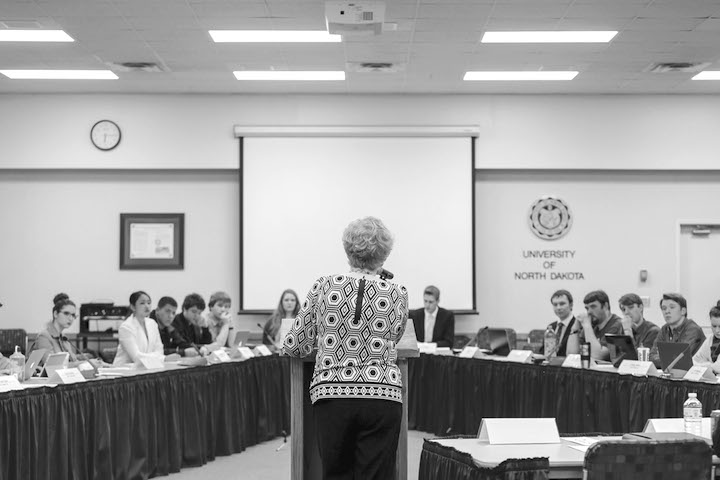 President Robert Kelley, Vice President for Student Affairs Lori Reesor, Vice President for Finance and Operations Alice Brekke and Vice President of University and Public Affairs Susan Walton were all in attendance at the student senate meeting to answer questions about tuition increases and to show their support for a 3.72 percent increase in tuition next year in favor of a higher increase proposed by the State Board of Higher Education.

Tuition has been a hot topic at the university over the past two weeks after the State Board of Higher Education had put tuition increase on its agenda and was going to approve a 4.9 percent increase at UND for next year. The item was later removed and will be discussed at a later date.

With the 3.72 percent increase, UND would be projected for about a 2.5 million dollar deficit that the university would be responsible for covering.

“We’ve identified how we can live within that,” Brekke said. “Utilities is one item where we’ve been able to help balance some things. This year hasn’t been as bad as it could be. “

After hearing from university administrators, senate passed a resolution in support of the 3.72 percent raise in tuition for next year. The resolution included four clauses in the resolution.

The first clause was in support of the 3.72 percent rate. The second clause asks the university in the future to show why they need an increase in tuition rates. The third clause urges the State Board of Higher Education to get feedback from the student bodies before making budget decisions in the future.

The last clause urges the State Board to develop procedures for future budget decisions that require the schools to show a need for the increase in tuition.

Senate also passed a bill approving funding for the end of the semester DeStress Fest. This semester senate is giving $700 instead of the previous $600 in order to provide another massage chair during the event.

With elections coming up, there will be three forums for students to hear from candidates running for student government offices.