Series much better when both read, watched 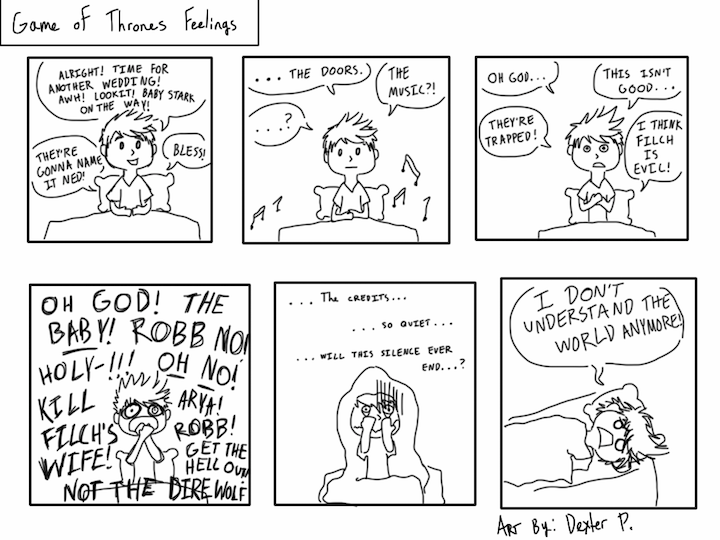 “Game of Thrones” is amazing.

I’m not a fan of fantasy. However, I’m willing to make an exception for “Game of Thrones.” There are many things about both the TV series and the books that are great, but the best aspect is definitely the characters.

Unlike typical characters in fantasy stories, these characters have complex desires and motivations, which translates into riveting and engaging drama.

Another great aspect is the blurring of the lines between good and evil. There are a few characters that are unquestionably good from beginning to end, and there are other characters that are never anything more than pure evil. However, most of the characters end up in the middle. They are not necessarily good or evil, just desperate people doing their best to survive in harsh and cruel times and doing everything they can for those they love.

I could go on forever about everything I like about this series, such as the extremely well written dialogue, the cinematic writing style of George R.R. Martin or the immense amount of creative effort that goes both into the show and the books. However, it’s best if you just see for yourself.

When you do decide to watch the show or read the books, you should do both. If you are already doing one, you should also be doing the other, at least if you are a big fan.

I’m guessing more people are familiar with the show than the books, but both are very good and each offer so much. The books are well written, engaging and provide interesting additions the show doesn’t include. There are so many extra brilliant scenes in the books, I’ve started calling it the extended version of the show.

Some of the books occasionally have pacing issues, but these are fixed by creative changes made for the show.

Besides perfect casting, one of the reasons why this show is so beloved is the show is extremely faithful to the books. Even though there are minor changes, I don’t have a problem with them.

Each season covers the events of one book, although since season three the writers have been borrowing from books four and five. Whereas the books occasionally jump around in time with flashbacks and multiple events happening simultaneously, the show has chosen to let events unfold in their chronological order.

The first season makes virtually no changes at all to the first book. After that season the show does add scenes, leave out others and move things around, yet it still remains incredibly faithful to the books.

If you are only reading the books or watching the show, you should start doing both. Either way, you will run into great new material that doesn’t feel out of place with anything you’ve encountered so far.

If you aren’t doing either, now is a great time to start. With spring break right around the corner you have plenty of time to binge watch all three seasons or binge read all five books in time for the season four premiere of “Game of Thrones” on April 6.

Mike Rauser is a staff writer for The Dakota Student. He can be reached at [email protected]