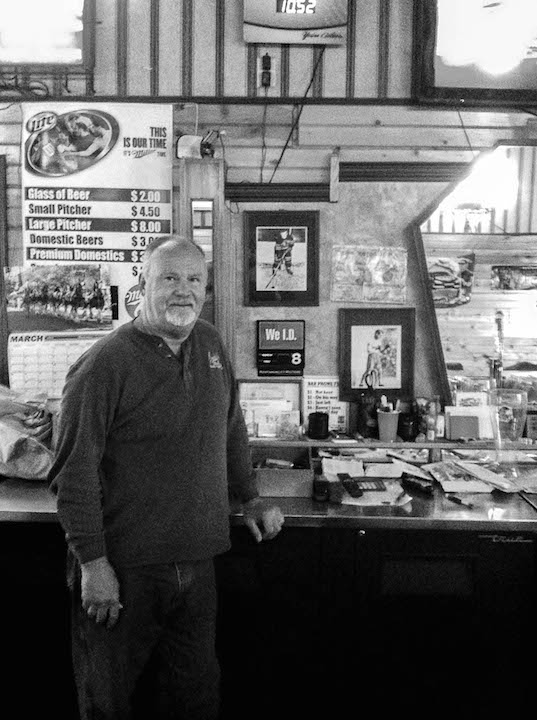 Gary and Sharie Rogalla will celebrate 25 years of owning and managing Judy’s Tavern on April 1. Judy’s been serving faithful regulars, celebrities and college students in its location on North 20th Street for over 60 years.

Contrary to popular belief, the bar did not get its name from bartender Nancy Schumaker, although she accepts the name anyway.

“Judy” was actually a local boxer named John Ruddy, who originally opened the bar on the intersection of Highway 2 and North Washington Street. Ruddy’s black and white photo is still displayed behind the bar in its current location.

Judy’s is modest on the outside, with a lone Budweiser sign marking its presence, but, upon walking in, one will notice the immense amount of Grand Forks history displayed on the walls and table tops. Signed sports paraphernalia, posters and pictures add to the tavern’s nostalgic feel.

Over the decades, Judy’s has been a home away from home for generations of regular customers. Regulars nicknamed “Z,” “Diamond,” “Quiet Don,” “Butch” and “Shorty” hang out at Judy’s most days, and are usually willing to share stories from the bar’s past.

“You’ve seen the show ‘Cheers’ — everybody knows everybody,” Rogalla said. “Back in the day, the college kids would come in and screw with the regulars. I had some weird regulars back then, but they always had a good time with those guys.”

Since the Rogallas took over, Judy’s also has served local celebrities like legendary NBA coach and UND alum Phil Jackson and former UND hockey players Jonathan Toews, T.J. Oshie and Mike Commodore — who brought the Stanley Cup into Judy’s after winning it with the Carolina Hurricanes in 2006.

The bar also boasts a scar on its floor from UND football players dropping the 75-pound Nickel Trophy they won after beating NDSU in an old rivalry game.

“Almost any coach that has coached at UND has been through here,” Rogalla said. “Fido Purpur used to bartend here, too.”

Purper is a Hobey Baker Legends of College Hockey Award winner and the first North Dakotan to play in the NHL.

In 1997, when much of Grand Forks was ruined by flood waters, Judy’s survived and continued to serve the community.

“We sold a lot of beer,” Schumaker said. “We sold every single can and bottle that we had.”

Later, in 2001, the roof was torn off the bar during a storm and the building was ruined with water damage. The Rogalla’s were forced to renovate and finally got rid of the shag green carpet that used to line the floor and walls. They also were able to raise the roof on the building nearly two feet.

Rogalla said the football team playing in the Alerus Center and the popularity of bars downtown has decreased the amount of business from college students in the last 25 years, but students still come by to enjoy the atmosphere and beer specials.

“It’s kind of a chill bar, its just a nice place to hang out at,” Goetsch said.

Saturday night was Goetsch’s first time at Judy’s. He said he enjoyed talking with the regulars and hearing about the bar’s past.

“I always come because you don’t have to worry about a busy crowd, it’s nice and low key,” Przybylski said. “Pretty good deals on the drinks, pretty good fan base here too.”