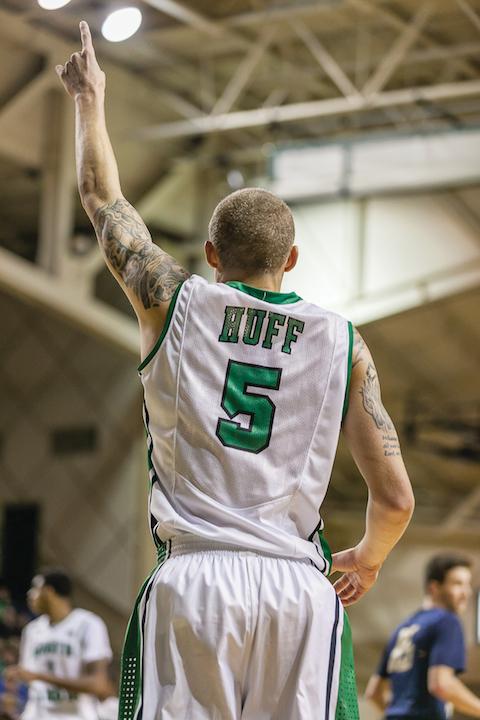 With the last home game for several players and the mounting pressure of the Big Sky Conference race, many teams would have folded under the pressure.

But the seniors of the UND’s men’s basketball team rose up to the occasion, as they have been doing all season long.

The Green and White exorcised some old demons on Tuesday night, beating the Northern Colorado Bears, 90-94. This was a revenge game, as the last time the two teams played, the Bears dominated UND, 84-66.

“Coach wrote the score on the board from last game,” Troy Huff said. “I think that’s all we needed. He didn’t say much about it, he just said that’s all you guys need to know about this game.”

Using that game as motivation, the players knew they wanted to make a statement early.

The first half started out like UND’s games have all season. Neither team could find a rhythm to gain the upper hand. That was until UND’s seniors started to do what they do best — take over the game.

As the defense started to create turnovers and contested shots, the offense started to flow. One of the main turning points in the first half was when Aaron Anderson and Jaron Nash hit back-to-back threes, making the score 40-29. The energy in the air was palpable, and the fans could feel the momentum shift.

The Green and White finished off the first half leading 56-43. Troy Huff, who has been playing his best ball in the second half until now, had already put his stamp on the game.

“You know, I got a lot of shots up, but I just wanted to come out and play with confidence,” Huff said. “Just play my last game here, and give my all.”

While the Bears never recaptured the lead, the second half was hard fought by both teams. Every time Northern Colorado would try to go on a run, UND would get a turnover or a big shot to calm the storm.

“We got a couple key stops, but we had some good possessions offensively that were longer possessions,” UND coach Brian Jones said. “Troy had a big basket when they were making a run that kind of got us going, and Alonzo had a big second shot, big offensive rebound that kept the possession alive.”

Through UND’s determination and heart, it was able to hold off Northern Colorado’s to secure the victory.

While it may have not have been the best defensive game, UND still made the right plays to win the day. The main advantage was that the Green and White dominated on the boards as they finished the night with 33 rebounds to Northern Colorado’s 16.

In their last game at The Betty, the seniors stepped up to play.

Huff finished the night with 34 points and six rebounds. Aaron Anderson had a great night, with 20 points on four for five shooting, getting to the free throw line all night. Jaron Nash also had an efficient night, shooting six for seven, and dropping 14 points.

Even seniors like Jamal Webb and Alonzo Traylor, who did not have giant nights on the stat sheet, still had successful nights overall. Webb had some key assists, and Traylor forced a huge offensive rebound late in the game that kept the Bears from coming within a score of the lead.

The Green and White are clicking at the right time of year. With the win over the Bears, UND clinched a spot in the Big Sky tournament, won its fourth game in a row and secured a top-three seed in the conference.

With all that, though, the focus has not changed.

“Finish. Finish what you started. Finish this run,” Jones said. “It’s not going to be easy. You can’t give in to the travel. You can’t give into the short turn around. It is more about our pride and our toughness.”