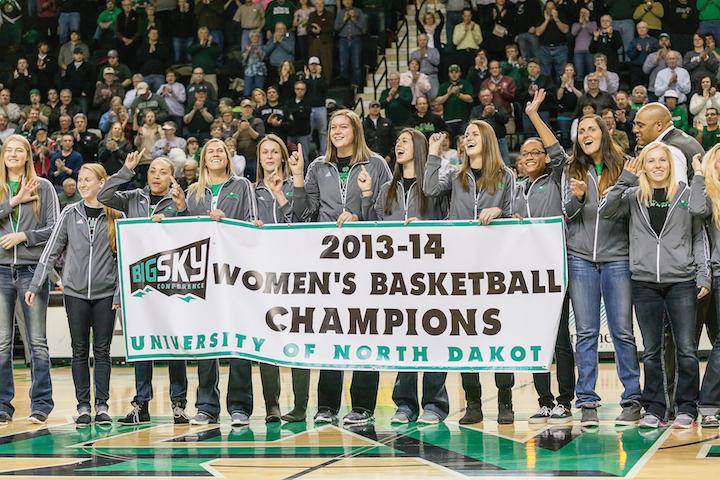 Most freshmen athletes spend the majority of their first seasons on the bench — but not women’s basketball point guard Leah Szabla.

The Brooklyn Park, Minn., native has appeared in all 28 of this season’s games and started in 24 of them.

“I think that coming in as a freshman, it’s been a real honor to be a part of a team that’s been so successful,” Szabla said. “I’m just really excited to keep it going to hopefully host the Big Sky Tournament and to make it to our goal of the NCAA tournament. It’s a big blessing for me. That’s something that I always wanted to work for and I was hoping to contribute to the team in any way possible, and it’s worked out in my benefit.”

Szabla has brought her award-winning ability to create opportunity with her from Providence Academy High School, where she lettered six years in a row in basketball and still holds the record for all-time career assists with 382.

“I would say my role on the team is to be the point guard and to set up plays and to get everybody organized and to make plays with assists, or if it opens up on the offensive end and I can score, just to be a threat,” Szabla said. “Mainly just to set up the offense, be a passer, be a distributor and also to be a leader in that way, too.”

The 5-foot-9-inch freshman has 45 steals so far this season and averages just under three assists per game, the second most on the team.

“I think that defensively the coaches have been getting on me about moving my feet and I got in a good amount of foul trouble so I think I’ve improved in that area,” Szabla said. “I think my 15-foot jump shot has gotten a lot better, and overall just like the basketball IQ part of it has improved.”

As for the rest of the team, Szabla said the ladies are a part of her family.

“We started practicing in June before Canada, so I think our team chemistry has been very good since then,” Szabla said. “I think we have a team that’s more family-oriented and we all are each other’s best friends and we’re supportive of each other. We’ve always loved each other and loved to see the other one be successful.”

With the regular season finished, the team will have a week to rest up before the start of the Big Sky Conference Tournament on  March 12.

The team plans on doing what its been doing all season for the upcoming tournament — playing its game and crashing the boards.

“Our strategy is just to simply play our game and to do the things we know how to do,” Szabla said. “Defensively, we’re trying to lock down their best players and rebounding has been the name of our game all season, and just to limit turnovers and just play together. Everything will work out if we just play hard and do everything we can.”

North Dakota looks ahead to the tournament with optimism and stays focused, but the women know they always have room to improve.

“There’s always things we can work on,” Szabla said. “We really stress rebounding and defense and turnovers — stuff like that, just everything just overall getting better and better every day and everyone individually improving, and as a team getting better.”