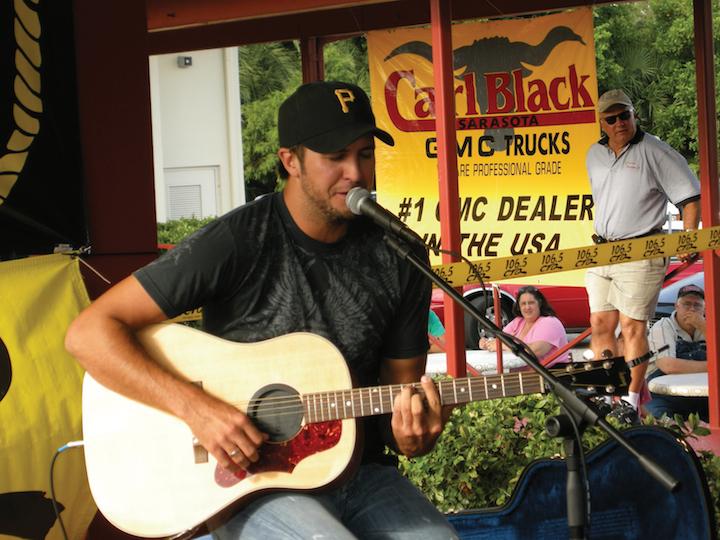 Beer was the magic word Friday night as country stars Luke Bryan, Lee Brice and Cole Swindell sprayed the crowd with warm, foamy Miller Lite during their “That’s My Kind of Night Tour” stop at the Fargodome in Fargo. The sold-out show boasted music, flashing lights, flannel shirts and, most importantly, overpriced beer.

It seemed the concertgoers could hardly wait to pay $6 for 16 ounce cans of light beer from the amount of oversized trucks that surrounded the Fargodome hours before the show. In fact, the two and half mile drive from the Howard Johnson Inn in downtown Fargo to the venue took nearly 45 minutes and required several evasive maneuvers.

Later, between the opening acts by Cole Swindell and Lee Brice, a 30- yard beer line took the same amount of time and maneuvering.

My girlfriend and I found our seats just as Lee Brice was taking the stage. The audience tried to applaud, I’m sure of it, but their hands were too full. The sparse clapping ceased as the lights dropped and a low, ominous voice began a monologue about man’s greatest achievements — concluding with the statement that beer was the greatest achievement of human kind.

Now, the audience found a way to clap.

Brice continued with a set including hits “Hard to Love,” “A Woman Like You,” “Love Like Crazy” and “Beer.” As a guitar enthusiast, I was disappointed with Brice’s fake guitar playing, except during his single “I Don’t Dance” when he actually played.

The crowd left their seats during a half hour intermission following Brice’s set. Luckily, I had stocked up on cans of “humankind’s greatest achievement” and was able to stay in my seat and evade the sea of flannel and blaze-orange clad fans. During this time, I saw several UND students and people from Grand Forks walking by, and I realized that people had come from as far as Bismarck to attend the show. Soon, the hoards returned, and the lights turned off, marking the onset of Luke Bryan’s set.

The big screens showed Luke Bryan pulling back a bow with a flaming arrow, and as he shot it off the screen flames erupted and Bryan emerged from under the stage on top of a souped up Chevrolet. Stagehands ran around throwing Miller Lites into the crowd as Bryan burst into song amidst the wailings of the crowd.

His set included hits “Drunk On You,” “I Don’t Want This Night to End,” “Country Girl” and “Rain is a Good Thing,” Bryan unsubtly plugged the words “North Dakota” and “Fargo” into several of his songs, enticing a roar from the crowd. He sang about trucks, girls, parties, farms and most frequently, beer and getting drunk — everything one can expect from a country concert.

I was disappointed with Bryan’s guitar playing, but his band, namely his lead guitarist Michael Carter, was talented. Bryan held a guitar for about half of his songs, but hardly played it. The most disappointing part of the night came when Bryan played a beautiful song on piano. He sat center stage, playing and singing, but when he raised his hands to clap the piano kept playing. He was faking it.

The concert concluded with a song about Bryan’s grandfather dying called “Drink A Beer,” proving that there is not a situation in country music that doesn’t involve beer. Whether you are driving, hunting, mourning a death or partying, beer should be involved, according to Bryan’s songs.

It’s tough for me to rate this concert, because I’m not sure what to judge it on. The music sounded great, but I couldn’t get past the fake piano and guitar playing. I could also do without seeing Luke Bryan dance around in his skinny jeans, but the crowd seemed to enjoy that almost as much as the beer and North Dakota references.

I give the concert three out of five stars. I like beer as much as the next guy, but at a certain point the music has to separate itself from being a Miller Lite commercial — and the Luke Bryan concert did not.