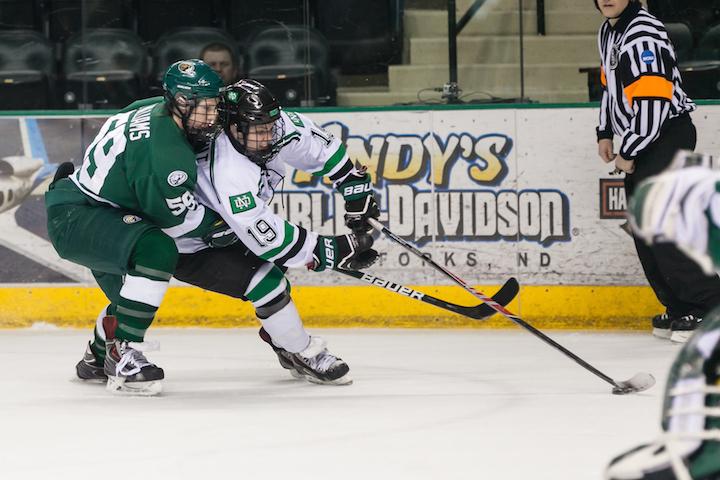 The UND women’s hockey team started its first round of playoffs last weekend as it hosted Bemidji State at the Ralph Engelstad Arena in a best of three series — both teams vying for an overtime goal Saturday night that became the only separation to punching a ticket to the Final Face-Off.

UND beat Bemidji State 4-1 Friday night and in overtime Saturday, 3-2. UND now will move on to the WCHA Final Face-Off that will be held in Bemidji, Minn., this coming weekend.

“This is awesome,” UND defenseman Gracen Hirschy said after the win Friday night. “It gets us out of our funk and you know we just gotta keep going.”

Hirschy had two of the four goals in the first win, helping UND erase its four-game losing streak.

“I thought we did a good job defensively for the most part, and managed the puck coming up ice pretty well and won the inside and really had a few more chances,” UND coach Brian Idalski said. “Thought their goaltender played pretty well we could have blown it up a little bit more I thought with the aggressiveness.”

Meghan Dufault was the hero of Saturday’s game with her game-winning goal in the overtime session to give UND the win and the two-game sweep of Bemidji.

UND got on the scoreboard first, but Bemidji fought back and held tight until Dufault set the 3-2 win.

“I don’t remember it that well, but I was just going hard to the net and the rebound popped up back door and I backhanded it in,” Dufault said. “I wasn’t expecting it and then it was right there on my stick, so it was just a tap in.”

Being able to knock off Bemidji and move on is a big step for UND after its struggle in the last few series.

“They work really hard and they bring five people back to the house really deep, so it’s hard to get offensive in front of the net because they box us up pretty well,” Dufault said. “They compete hard, and they are always really hard to play against.”

The opponent UND will face next has yet to be determined. This will be the first year  Bemidji has hosted the tournament in its history and also the first Final Face-Off at the new Sanford Arena. UND will play in one of two semifinal games and if the team succeeds in that game, it will move on to the final game to be played Saturday.

“We’ve got to take it game by game and just focus on our next game next weekend and then take it from there,” Dufault said. “But definitely the two wins helps our team attitude.”