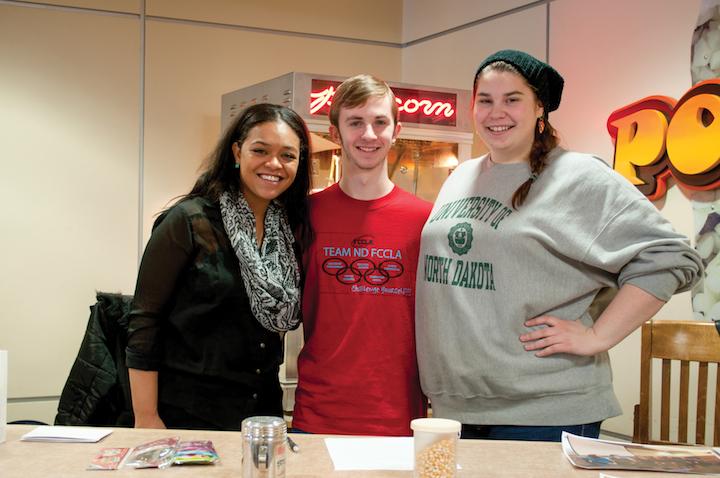 Two UND forensics team members have qualified for national competition as part of the team’s effort to restore the program to its past form.

The pair also looks to qualify in a new dual event it started preparing for weeks ago.

Team member Natasha Puetz has yet to qualify for nationals, but is still seeking to earn a spot in prose interpretation.

The team encourages students and faculty members to attend the Forensic Showcase on Wednesday from 1-3 p.m. at the Center for Innovation Idea Lab.

After coming together early this fall, the group competed nearly every other weekend in tournaments in both Fargo and Bloomington, Minn.

Despite qualifying for nationals in two events, and having competed in high school, Muscha said he felt a lack of guidance from experienced upperclassmen early in the year.

“As the season progressed, we became more experienced coaching ourselves on how we can do better and bring home more trophies to decorate our rooms,” he said.

Muscha said he has talked to friends in high school about joining when they come to the university next fall, and he looks forward to helping the group get off to a fast start.

In an effort to raise funds for the trip to nationals, and to recruit new competitors, members of the team sold popcorn last week in the Memorial Union and used emails, Facebook and text messages to reach out to students.

Beyond fundraising and preparing for competitions, coach LaRoyce Batchelor said members of the team also judge high school events, which has helped promote their team.

“When those high school students get ballets back, they will say ‘comment (from) UND,’ so they know UND is back and that there is an option at the school to compete at a college level,” she said.

In addition to promoting the program, Batchelor said judging helps the team practice.

“The competitors get the experience of analysis and judging,” she said.

Watkins said the group is starting strong, and hopes to grow in the future.

“We are definitely small, but definitely mighty,” she said. “We have three members right now, and we are always looking to increase our numbers, because a bigger team means more fundraising options.”

As a past UND Forensic team competitor, Batchelor started looking into rebuilding the group after returning from teaching in Canada in 2009.

“After competing myself, I was a little disappointed that they didn’t have a team,” Wright said. “I was also excited because it would give me the opportunity to start something great.”

Wright said she quickly figured out what she needed to start a group at UND, and that is how she came to meet Batchelor.

After spending more than a year writing a constitution together, Batchelor and Wright lead a team of three on their first real step towards competing again, and they brought home two trophies — the first since 1994.

“While we competed, it was more of an experiment,” Batchelor said. “We needed to get our name out there so we could start receiving invitations to tournaments.”

During the time Batchelor was involved as a student, she said there were consistently 12 to 20 members on the team. While some of them debated and some focused on forensics, each side was required to take part in the other side’s events on each off weekends of their own.

In order to get students involved once again, Batchelor has promoted the team across campus and is determined to stay away from a communications majors based team.

“We want to be across the campus,” she said. “It should not be just be for communication majors. This experimental learning should be for all who want it.”