I know everyone is sick of hearing it, but I’m going to say it one more time — it’s really cold outside.

I don’t know why I let it surprise me every year, but the first frosty north wind that slaps my face on the walk home from class leads me to realize that I live in the second coldest city in the United States.

However, for this blog entry, I am going to forget about the freezing Nodak wind and instead focus on the warmth inside my home.

Central heat, and heat in general, is something I took for granted for 22 years, but this month, I appreciate it more than ever because I lived in a house without heat until the day before Thanksgiving.

Last winter, the day after I moved into this house, our furnace went out. For an entire week, my roommates and I sat in our living room with jackets and hats on. We slept in layers of clothes under extra blankets as the in-house temperature dropped to as low as 53 degrees.

We were lucky then.

This fall, after dealing with flooding issues in the spring and throughout the summer, we were told not to run our furnace because it is old, broken and hazardous. We watched as the house temperature dropped from 65 degrees in mid-October to 46 degrees in late November. During November, I don’t think the house temperature ever rose above 55 degrees.

In mid-November, I could see my breathe inside the house. Some of my roommates spent entire nights sleeping in Gamble Hall.

But we waited with hopes that our landlord would come through with his promise of a new gas-powered furnace and gas line from Excel energy. With the new furnace, our energy bill would go way down and the house temperature would go way up.

I refuse to point fingers, but it seems there has been some poor communication between our landlord, the maintenance crew and Excel Energy. Our landlord has known about the old furnace since last winter, and has had almost a full year to replace or fix it, but nine months later, we are still without proper central heat. I have heard that Excel is dragging the process out so they can charge a higher rate to install it, but I can’t back that up factually.

And here is the worst part.

After living in the cold for a month and a half, one of the maintenance guys came in and turned on our old furnace. It fired right up and within six hours, I could feel my toes again. I told him that we were under the impression that the furnace was a fire hazard, but he said we should have been running it all fall.

My house is warm now, and will be — whether by a new furnace, the old furnace or a house fire — for the rest of the semester. Excel started putting a gas line in the week before Thanksgiving, decided it was too cold to keep working, and finally came back today (the coldest day of the year so far.)

The whole thing doesn’t make sense to me. It seems like something was lost in translation, but for now, I’m grateful to be warm inside my house, no matter how cold it is outside. 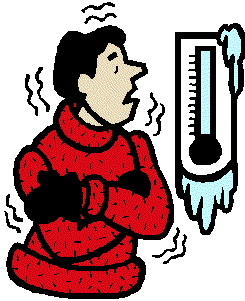