While many schools have begun allowing coed roommates, UND has no plans to as of now. 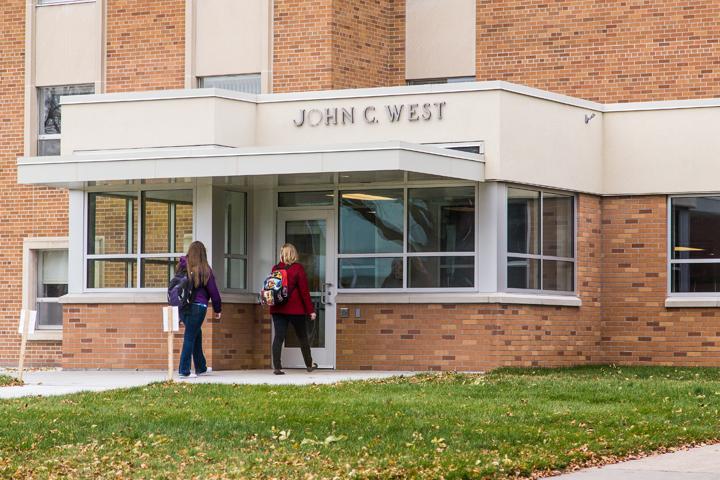 UND Students enter West Hall, which is a coed building. Although men and women are both allowed to live in the building, the wings remain separated by gender. Photo by Chester Beltowski/The Dakota Student.

Across the country, universities have started to reconsider gender being a factor in rooming within the dormitories, creating “gender-neutral” housing.

More than 55 universities have jumped on the “gender-neutral” housing bandwagon, including Stanford, Cornell and Columbia.  The development in gender-neutral housing began with an effort to help make gay and transgender individuals feel more comfortable in University housing, according to the Washington Post.

Earlier this year, the University of Wisconsin-La Crosse began allowing male and female students to live together in suite-style dorms upon request. Although there is only one residence hall that offers these accommodations, since there is only one dorm that has suite-style units with separate bedrooms, campus officials at La Crosse believe that this is a step towards equal rights.

Although many schools have started allowing coed roommates in some dorms, it does not look like UND will be the next school to make this big jump.

“We have not had any requests from students for gender-neutral housing,” said Cindy Spencer, UND Director of Resident Life and Education. “If we do get these requests, we would talk to the students and the school board in order to find out what we can do to make these accommodations.”

From within the housing staff members, former resident assistant in Johnstone/Fulton, Emily Hill, can see benefits in people of opposite genders living in the same suite area, but not the same room.

“As an RA, I noticed that dorms that had both males and females on the same floor were often cleaner and more social,” Hill said. “I can see situations getting messy for the housing department if couples break up while living in the same room, but ultimately living in the same suite could have benefits, but it should always be a choice for the students to do so.”

Although some staff members seem willing to accommodate, students on campus seem opposed to the idea. Many students interviewed were against the idea because of their own personal religious beliefs. Others assumed it would create tension among residents in the dorms.

“I see this as an excuse for couples to live together,” freshman Taylor Reetz said. “What happens when the couples break up? I just see this situation causing a lot of unneeded drama.”

After speaking to several students, The Dakota Student found that overall males seemed more open to the idea of gender-neutral housing than females.

Students with a neutral stance on housing seemed to not oppose merely because it wouldn’t pertain to them.

“I don’t care if students of opposite genders room together,” freshman Elisabeth Bender said. “I don’t plan on doing it, but that doesn’t mean other people shouldn’t have the chance to. If it makes some people more comfortable to room with people of the opposite gender, then I am not going to stand in their way.”

Although the idea of gender-neutral housing seems to be making waves across the country, it won’t be making an appearance at UND anytime in the near future.

Erin Cheever is a staff writer for The Dakota Student. She can be reached at [email protected]