Fraternities and sororities work together to raise awareness, money for charity. 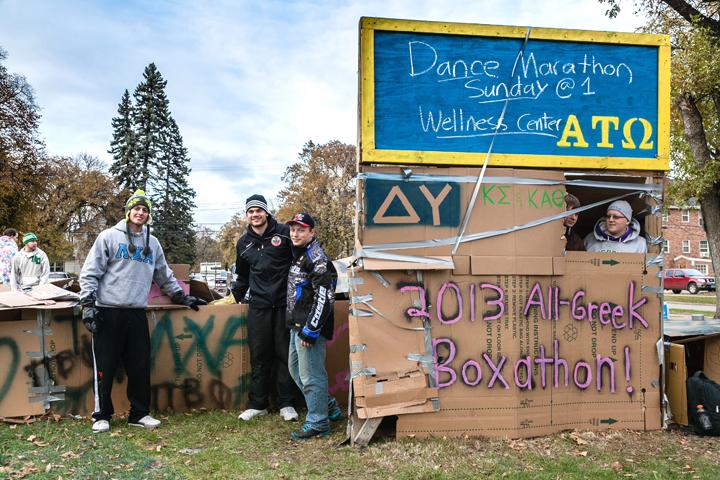 This Wednesday, students walking down University Avenue past the Chester Fritz Library saw an unusual sight for a college campus:  lawn filled with students sleeping in spray-painted cardboard boxes, while others gathered around the fire in winter clothes trying to keep warm.

The scene was part of the Greek community’s first all-Greek chapters philanthropy event held in years.

The ‘Boxathon’ philanthropy event started at 12 p.m. on the Alpha Tau Omega fraternity lot. Each Greek chapter camped out on the grass in a cardboard box for 30 straight hours to raise awareness and funding for poverty in the Grand Forks community.

“When I was in high school, I was in an event called ‘Homeless and Hungry,’ which was a similar concept,” Interfraternity Council President John Mitzel said. “A goal that we had at a Greek Council retreat was to plan an all-Greek philanthropy event, and we decided to go forward to the boxathon.”

Each of the houses had two members at the Boxathon at any given time. Houses were allowed to choose how they took turns: Most went in two to four- hour shifts, while other members volunteered to rough out the entire night.

Members whose turn it was to attend passed the time by either staying in their box where they were out of the wind, or gathering around the bonfire with the other Greeks and socializing. With temperatures dropping to below-freezing, most students chose to wear winter clothes or multiple layers to keep warm during the event.

“This has been a good way to bond and be active in the Greek community, especially for a new member,” new Alpha Chi Omega sorority member Jamie Holmgren said near the end of her shift. “I’m wearing five layers so I’m feeling all right. We get to hang out as friends instead of just attending events together.”

Proceeds will be donated to St. Joseph’s Social Care in Grand Forks. Although there was no set amount of money the event is working for, Mitzel said he hopes that to raise $5,000.

“We’re trying to raise awareness of poverty and raise funds for people in the Grand Forks area who need food and shelter,” Kappa Sigma fraternity secratary Hunter Erickson said. “It’s the first all-Greek philanthropy done here at UND in years, and everyone is looking forward to seeing how well it turns out.”

Mitzel said he hopes more all-Greek community events like this will be held in the near future.

“This has provided a tremendous stepping stone in bringing the community together to work for a cause,” Mitzel said. “We couldn’t be more grateful for the effort the Greek community has put into this, and this project proves that philanthropy is a huge part of the Greek experience.”

The event ended on Thursday at 6 p.m. with an all-Greek bonfire to celebrate the completion of the project.

Larry Philbin is the news editor of The Dakota Student. He can be reached at [email protected]