ROTC plans to move ahead with changes when new mascot is decided. 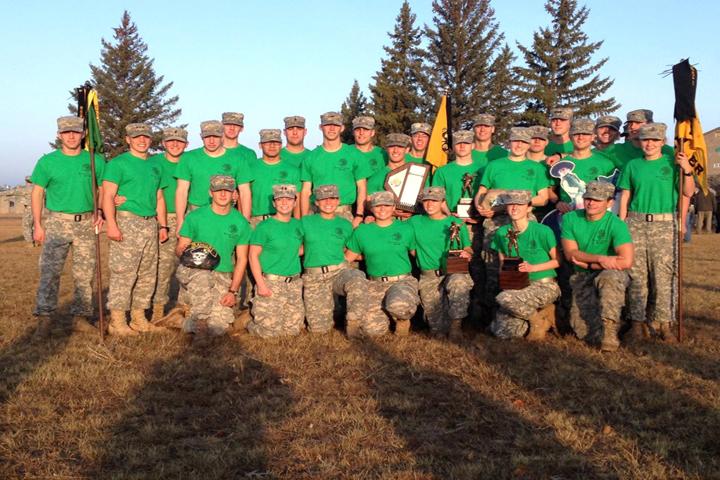 Although the UND Army Reserve Officer Training program is no longer the Fighting Sioux Battalion, traces of old tradition still remain on some parts of the uniform.

The story “The Flying Sioux” in the Oct. 14 edition of The Dakota Student reported on the aviation department’s continued use of the mascot and maintenance of past traditions.  The aviation department uses the word Sioux for its call sign for safety reasons, the ROTC program has a similar situation since it is beyond its control.

On the UND Army ROTC uniforms, there is an insignia on the shoulder sleeve and the shoulder loop that displays an image of a Native American chief’s head.

This image is not the same logo that UND used while it was the Fighting Sioux.

This insignia is used by the State of North Dakota and was granted to UND by the Institute of Heraldry in 1950.

According to its website, the Heraldry serves the Federal Government, the Armed Forces and the Office of the President as a communication system that uses colors and symbols for the purpose of personal or organizational identification.

“When the university did away with the Fighting Sioux, I was completely in support of that because of the image our school has with that,” said L. Col. Clarence Carroll, professor of military science.

When the university’s sanctions are removed in 2015, and the process to pick a new mascot begins, the UND ROTC program plans to follow suit with whatever mascot is chosen.

“We will request a change to our program that is something consistent with the new logo,” Carroll said.

Previous to the nickname being retired, the ROTC program was named the Fighting Sioux Battalion, and there were Sioux logos around the building that have since been removed.

“The armory has done a good job of eliminating Fighting Sioux in our programs,” Carroll said.

At every school that has the ROTC program, the battalion name is “fighting” followed by whatever the school’s mascot is.  For example, North Dakota State University’s ROTC program is the Fighting Bison and St. John’s University is the Fighting Saints.  This policy will go into effect at UND once a new nickname is chosen.

Jordan Dibich, a member of the Army ROTC, learned about the origin of the insignia in class.

“I don’t think it’s common knowledge where our patches come from, and I think it’s a cool fact,” Dibich said.

Ashley Marquis is a staff writer for The Dakota Student. She can be reached at [email protected]