Culture conference kicks off with a unique pop music showcase. 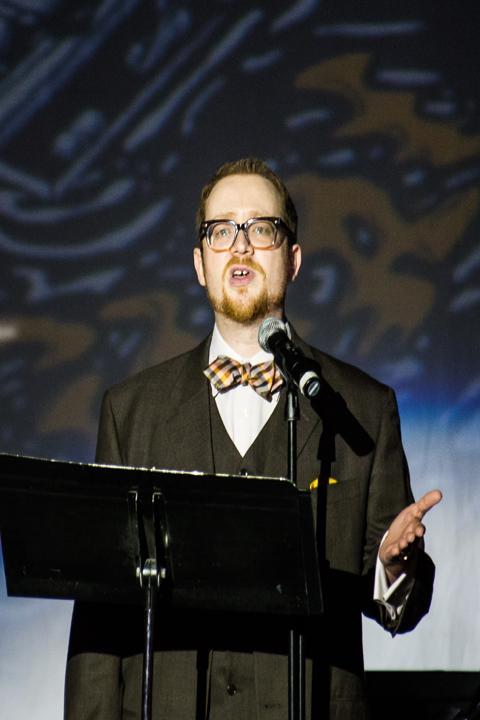 Event organizer Brett Ommen addresses the crowd Tuesday during the opening event of the 2013 Arts and Culture Conference in the Empire Arts Center. Photo by Chester Beltowski/The Dakota Student.

A few UND music ensembles led off the 2013 Arts & Culture Conference on Tuesday with a concert featuring several songs written by Beck at the Empire Arts Center.

Although the songs were composed for the piano, the UND ensemble used special arrangements from Christopher Gable, a lecturer in music at UND, to perform “Do We? We Do!,” “The Wolf is on the Hill”  and the other pieces with different instrumentation, from brass quartet and string quartet to trumpet assemble.

“I think this was a good place to start, because it shows there is a lot of variety,” said Brett Ommen, the event’s organizer. “That variety is expanded upon the entire conference.”

“Musical styles are so important,” she said. “Hearing different interpretations of a song is kind of what makes an experience special. Taking the melody provided, they did a really great job.”

Gable said, as a regular music arranger, the process was not as tough as many may think.  He started with watching how others had interpreted the sheet music on Youtube.

“You could have a very different interpretations of the same song,” Gable said. “There could have one be for an electronic style version of one song, and the next one down could be a guitar.”

From there, Gable went on arranging the songs one at a time while pinpointing how each song could be done to fit each group.

Prior to the playbook, songwriter Beck had written 11 other recordings, Gable said. Beck has never performed his pieces live since putting them out just over a year ago.

“There is something you can tell from somehow, that they are Beck songs,” he said. “The
difference here is it is all on the decisions of others. He does not provide any if little instructions.”

Continuing on Beck said the difference here is it is all on the decisions of others. He does not provide any if little instructions.”

Beck believes the benefit of the sheet music is that there are multiple versions. It is not las though the version was put on a CD and was the only one.

After finally finishing the arrangement, each group was given the songs to rehearse for a few weeks leading up to the event.

Throughout the rest of the week, several other events occurred including a screen of Schreck’s Persistence of Vision and a Q&A Panel that discussed the role of curation in their work and everyday life, on Wednesday.

The Q&A panel was made up of special guests artist Craig Drennen, Kerri Miller of the Minnesota Public Radio, and David Pagel of the Los Angeles. Others on the panel this week, were Jennifer Preston of the New York Times and filmmaker Kevin Schreck.

The event wrapped up Thursday with two visual art lectures given by both Pagel and Miller a closing reception.

Mathew McKay is a staff writer for The Dakota Student. She can be reached at [email protected]