The more time I spend in Grand Forks, the more things I learn to love about the town.

A lot of people, especially those who grew up here or around the area, talk about how it’s not that special or how there isn’t much to do here.

But that’s not what I’m talking about when it comes to Grand Forks. The city–and university–have a lot of history and a lot of things that make it a place that is awesome to live in and a great place to go to school. Compared to some East Coast cities, Grand Forks isn’t really that old–it’s about 140 years old–but a lot of the buildings downtown and on the campus still have that old-time feeling.

I walked around downtown Grand Forks for the first time this past weekend. I’ve been to downtown, but I’ve never really walked around before. The buildings, the little shops and the local restaurants give the city a charm that you don’t get in big cities. The old buildings downtown and on campus are absolutely beautiful. I went to the University of Hawaii for my freshman year of college, and I have to say that I find the UND campus much more beautiful than the University of Hawaii’s campus.

The local restaurants add another dimension to the city. My favorite places to eat in Grand Forks have become those little places. I still love Buffalo Wild Wings as much as the next person, but Darcy’s or Rhombus Guys or the Red Pepper, places I’d never even heard of before I moved here have quickly become my favorites.

As far as college towns go, Grand Forks has to be one of the best. The history of the university, the (freezing cold) city and the way everyone cheers for UND allow me to feel connected to the people and the city, even if I’m only living here for a couple years. 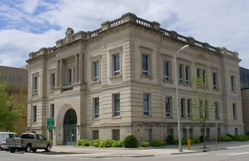