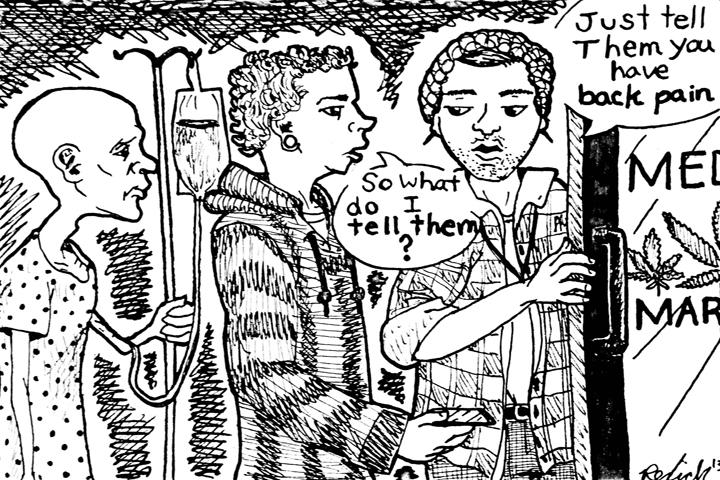 Given the legalization of marijuana in Washington and Colorado, I think it’s time that U.S. citizens had a heart to heart; why on Earth isn’t marijuana legal in all 50 states?

Given how much safer it is compared to cigarettes and booze, it seems a no — brainer that Mary Jane could come with us to the parties, but for some reason it’s still illegal.

The funny thing is, I don’t smoke. The closest thing I’ve done to lighting up a doobie is taking a few puffs off of an e-cigarette — and I’ll never do that again. Though, admittedly, my asthma is a great deterrent when offered — thus why it was only a few puffs and not the whole cartridge — the main reason I abstain is because I generally do not like partaking in illegal activities. It’s the same reason I didn’t drink until I was 21. This doesn’t mean I look down on those who choose to inhale. It’s your body and your choice.

I won’t call the cops on you, but I probably won’t join in either.

I have many friends who enjoy spending quality time with their bongs. I know people from all walks of life who like to light up. I know the burn-outs, I know the occasional smokers. I’ve seen the effects, and I know the results.

Drinkers and cigarette-smokers bug me far more than my stoner friends. I have never known a more unpredictable person than a drunk. I can’t be around my friends when they’re smoking cigarettes for too long, or I’m coughing for a week. It has even been all but proven that marijuana is safer than booze and cigs — check out the report that drugfree.org released in 2008. If drugfree.org is willing to say marijuana is safe, why on Earth are we waiting to legalize it?

However, through my own personal acquaintances and research, I have yet to figure out why we have such a vendetta against Mary Jane. It’s reminiscent of the prohibition of the 20s — and look how well that turned out. I’m not saying we should legalize everything. I would rather not see bath salts legalized, for instance. But we shouldn’t criminalize everything either. Either extreme is going to backfire.

It may seem weird that a nonsmoker is taking a stance for the legalization of pot. But here’s the deal: I don’t want to see my friends get in trouble. These people are good people. They are upstanding citizens who come from all walks of life. I know only one person who puffs who I truly dislike. I wish I could say the same about smokers and drinkers.

I guess what I’m saying with all of this is that we should all just chill out when it comes to dope. We only get one ride for sure on this merry-go-round Earth, so why shouldn’t we enjoy it responsibly? For some people, that means getting high off grass on occasion.

All in all, I’m pro-dope. I’m OK with this, and you should be, too. Just because something is legal doesn’t mean you have to do it. I know plenty of twenty-somethings who don’t drink for instance.

I’m a great example of a nonsmoking adult — well, save for the one e-cig — and that really just strengthens my argument.

I actually tried it, didn’t like it, and now abstain. If pot were legal, I’m sure there are plenty of people who would do the same.

Kjerstine Trooien is a staff writer for The Dakota Student. She can be reached at [email protected]