UND alumni look back at Homecoming

Former students from through the years reflect on their time spent at the university.

For the young and old, it’s a time to remember a place that influenced their lives.

UND Homecoming this year will draw graduates who remember back to the days of the Great Depression, recent students with fresh ideas in their minds and accomplished alumni who have had their chance to utilize what UND has taught them.

They all come from different backgrounds, but a common theme ties them all together — a loyalty to the university that has provided so much to them.

Recent college graduate Sonja Collin is grateful for the pages of her life she filled with memorable experiences during her college career.

“When you graduate, you have to close the chapter and close the book on college,” Collin said. “But that doesn’t mean you have to forget about where you went to college and forget all that it mean to you.”

“There’s a great loyalty to the University of North Dakota and a deep sense of appreciation that’s held by so many,” Strinden said.

For 1996 UND graduate Chad Syverson, coming home to the place he attended college and grew up stretches far beyond a routine.

In 1883, six years before North Dakota became a state, a newly founded UND consisted of a single building sitting atop a few acres of property. The building played host to eager students who traveled by train or horse to attend classes.

Over the years, the property size and the number of buildings grew, and the individuals that called themselves UND alumni climbed into the thousands. Coming back to the university was a time to reconnect with old friends and reach back to memories of college experiences.

Strinden, president of the UND Alumni Association from 1974 until 2000, and founder of the UND Foundation, began working for the alumni association in 1969. His dedication and loyalty to the university is a reflection of the work he accomplished.

For Strinden, Homecoming means a time to reconnect.

“This is just another one of those opportunities, and an important opportunity, to connect with alumni and coming back to meet with some friends. Many of these friendships become lifelong friendships and there are so many benefits for everyone.”

Among those benefits is the opportunity to remember the changes that took place over the years. Strinden still has memories of  “Camp Depression” lingering in his mind.

During the years of the Great Depression, the university moved cabooses on campus to house individuals willing to have jobs on campus and work in the cafeteria or with janitorial responsibilities. In exchange, those individuals were able to obtain degrees from UND, something they would not have been able to afford otherwise.

Reunions take on new meanings, but for these UND alumni the enthusiasm is unfading.

Collin graduated last May works as a mortgage loan officer in Grand Forks. The experiences she had during her time at UND have provided her with valuable insight and a desire to give back.

“It’s such an fun talking point when visiting with customers and working with them,” Collin said. “Not only that, but it gives me a lot of confidence, knowing that I’m a part of this community, graduated from UND and I received so much from the university. I want to be able to give back, and I want to makes sure that future students have as positive as an experience as I did.”

Collin also has directly benefitted from the Ignite Spirit Campaign; as she received the Dru Sjodin Memorial Scholarship her senior year, which allowed her to focus on academics and create a memorable college experience.

Part of that memorable experience came during Collin’s time on the Homecoming Court during her senior year.

“We all kind of bonded over that,” Collin said. “Being on the Homecoming Court gave me exposure to the alumni we have and how special it is to have a group of alumni that is so generous to the university that gives back in so many different ways.

“I think that’s one thing, being a part of Homecoming, I’m always so stunned by — that people are so willing to give back to UND. Now I’m part of that group of people that want to give back and I feel a desire to do to make sure the legacy lives on.”

Collin will attend Homecoming this year — but not in the way she’s used to. Friday, Collin will speak at the Spirit Celebration.

Although she may be younger than those who have been coming back to campus for countless years, Collin feels it is essential for alumni to show their support.

“I think it’s important for the current students to see it,” Collin said. “I was so touched last year when I was on the Homecoming Court and being able to see the wide variety of alumni that come back and see fond memories that are had at UND. It was eye opening to me as a student to see that.

“I’ve had such a positive experience here, but so have so many other people. That’s why they keep coming back, and that’s why they feel the desire to give and that’s why they’re so generous to the university … It’s just so neat to see that. I think that’s why I feel it’s so important to come back, just one year out because I was so inspired as a student and I hope one day I can have an affect on someone who’s going to school at UND.”

A chance to succeed

For Syverson, the memories are slowly fading from the tests he remembers taking or the classes he sat through to an overall sense of what he felt when he was a student.

“It’s both, but the mix has switched more from the specific side to the general side,” Syverson said. “The university really shapes your life in a way that most other institutions don’t both on the academic professional side and on the friendship side. Anything that affects the trajectory of your life is a pleasant experience and you keep those memories a long time.”

Syverson grew up in both Fargo and Grand Forks before attending UND to pursue degrees in mechanical engineering and microeconomics, so he often returns to the area to visit family and friends. But this year, Syverson will be coming back to UND to receive the Young Alumni Achievement Award.

Syverson is the J. Baum Harris Professor of Economics at the University of Chicago’s Booth School of Business and has taken on many projects, including co-authoring a textbook on microeconomics.

Syverson said the award he is receiving is a reminder of what UND tas taught him.

“It’s humbling,” Syverson said. “Obviously, it’s huge honor, and it’s humbling to think of all the people who have helped me achieve everything and that I was considered for this. I had a lot of help and I’m certainly cognizant of that. Obviously, I’m very happy.”

It’s a mix of greeting old friends after years have passed, cheering in the stands at the football game and walking on paths that weave through the campus that has influenced so many lives.

“Things evolve and things change,” Strinden said. “But the sense of appreciation was so strong, and I hope it will remain that way. This university is a launching pad with so many outstanding careers.

“Beyond that, it wasn’t just success in the field, but building a better world and reaching out to help others. We can be so grateful reaching back — reaching back always — to build a stronger University of North Dakota.” 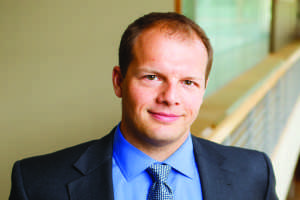 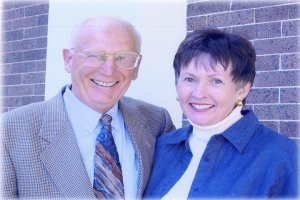 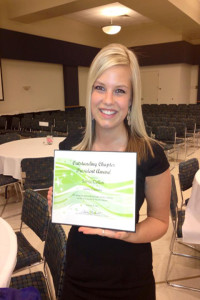