HOCKEY Pattyn brothers prepare to face off against each other this weekend. 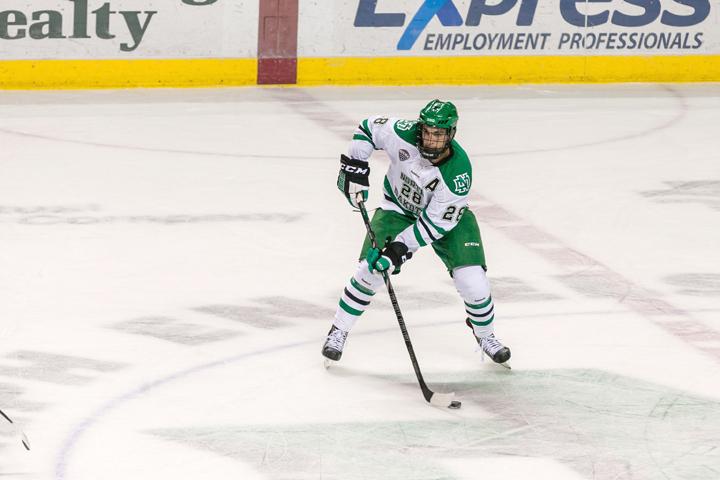 Steph Pattyn’s mother bought more than 80 tickets for this weekend’s hockey game against Vermont. And her son had to find 20 more.

For the first time, Steph Pattyn and his brother Yvan Pattyn will face off against each other in UND’s season opener against Vermont on Friday at the Ralph Engelstad Arena.

They may be friends, but the competitive nature of the duo could turn them into foes for an evening.

“I’ve played with my brother several times,” Steph Pattyn said. “I played with him in juniors, but I’ve never played against him. It’ll be good for my family and stuff to come see both of us at the same time. But, when it comes to it on the ice, I’m a very competitive person, so I don’t think my brother is going to stop me from doing what I have to do to win.”

Natives of Ste. Anne, Manitoba — population 1,626 — the brothers will be playing in front of many family and friends.

“It’s half the town,” Pattyn joked.

Both Steph and Yvan Pattyn said they are looking forward to the game.

“We’ve talked every day so far this week, just saying how fun it’s going to be to see everyone,” Steph Pattyn said. “For him, it’ll be so far away from home, and he doesn’t get to see everyone. For me, on home weekends, I usually have friends and family coming down.”

While playing against his brother is something to look forward to with excitement, Steph Pattyn is still focused on defeating his brother, claiming the bragging rights.

“I’ve actually watched quite a few of their games online this year and last year,” Steph Pattyn said. “I’ve noticed they’re a hard-working team. They pressure hard, and they work well together. So, it’ll be interesting to see this weekend how our style of play and their style of play works out.”

As a 6’1” defenseman, Yvan Pattyn skated in all but one game during his freshman year and posted three goals and four assists for seven points.

This year, he is on track to surpass that statistic.

“My brother is a defenseman — he’s kind of a stay at home defenseman, and very physical,” Steph Pattyn said. “He likes to make that hit if he can. And apparently he scores goals, because he got three this weekend. But, he’s a good hockey player. I know if there’s a way to beat him, I’m going to do it for sure. Maybe let a few of the guys know too.”

While the situation becomes a talking point, it is not the only time a UND skater will be playing against his brother.

When junior Mark MacMillan was a freshman, he had the opportunity to pay against his brother Mitch, who skated with St. Cloud State and is now a senior transfer at UND.

“For Mitch and I, it was a lot of fun,” MacMillan said. “We all know (Steph) likes to go out there and throw his body around. He keeps saying he’s going to go run his brother a couple times, so it’ll be fun to watch.”