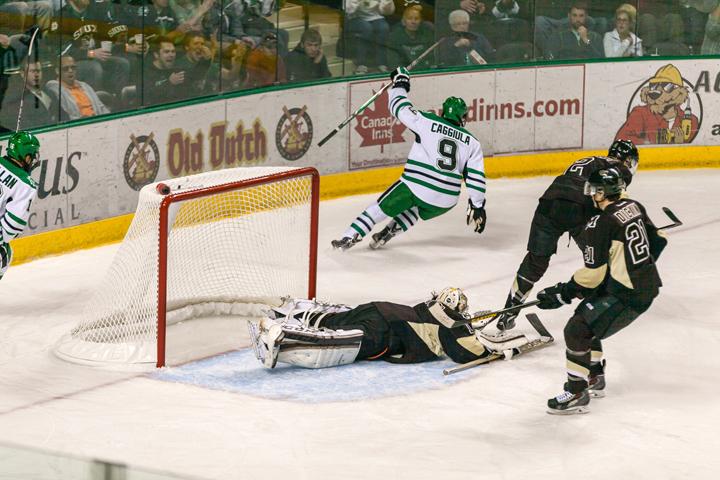 Sophmore forward Drake Caggiula celebrates after scoring UND’s first goal of the game at 10:23 of the first period. Photo by Keisuke Yoshimura.

When Michael Parks began his sophomore season, he was unsure of what would become of it.

But this season, the junior forward rebounded from an injury that erased his name from the roster for many games last season and tallied North Dakota’s second goal of the game en route to a 3-0 victory in Sunday’s exhibition game against Manitoba in front of 9,851 at Ralph Engelstad Arena.

Now, one year later, Parks said he is at a level he feels satisfied with.

“I spent a lot of time this summer trying to get my body to 100 percent, and I think I’m there now,” Parks said. “I’m just going to make sure to stay there the whole season.”

Parks and the rest of the team stepped onto the ice Sunday evening to thousands of roaring fans after a long summer.

“I think we had a real strong game as a team,” Parks said. “We’ve had a pretty long preseason and we were excited to finally get on the ice for a game,” Parks said.

Parks goal came with he carried the puck toward the net amidst Manitoba defenders, and was able to shoot in in past Joe Caliguri at the 11:38 mark of the first period.

“He had an excellent game tonight,” UND coach Dave Hakstol said. “He played a power game — played with speed, took pucks to the net, protected pucks down low. A very good start for Mike Parks.”

His goal was a continuation of momentum from the goal scored just minutes before by UND sophomore forward Drake Caggiula, who sniped the puck in the net at 10:23 after receiving a pass from Mark MacMillan in front of the net.

The Green and White’s momentum continued into the second period, but the scoreboard remained unchanged.

Manitoba’s Jordan DePape was awarded a penalty shot at the 13:40 mark of the second, but Clarke Saunders stood firm between the pipes — blocking the shot. Minutes later, both teams made goaltender changes and sophomore Zane Gothberg was awarded his chance in the net.

It wasn’t until 3:26 of the third period that freshman Luke Johnson tallied the third goal of the game, and his first in a North Dakota jersey.

“It was incredible,” Johnson said. “Growing up here, I’ve always dreamed of being on the ice in that caliber pace, so its nice to get out there and get the first one.”

While Johnson was the only freshman to see his name on the score sheet, the new additions to the team showed ample potential.

“I think they all looked great,” Parks said. “They might have been a little nervous, especially the local guys, but it was very special for them to put on that (UND) jersey and they all looked good.”

While conference play has yet to begin, Hakstol saw Sunday’s game as a good starting point.

“I thought we did a lot of good things,” Hakstol said. “I thought we really started out the game playing with some structure and I thought as we got moving, our five-on-five play improved. As expected, I thought we were a little rocky on specialty teams, but we got the job done.”

New look to the league

Following the game, a shootout in preparation for the upcoming NCHC conference rules took place. Manitoba was unable to capitalize on its chances, but Rocco Grimaldi and Parks each tallied a goal for the Green and White as fans watched what will be replacing overtimes.

“I thought it was good,” Hakstol said. “You never know what it’s going to feel like. The crowd enjoyed it, it’s going to be an added, exciting element to our new league.”

North Dakota will begin regular season action this weekend when it will host Vermont Friday at 7:07 p.m. and Saturday at 7:37 pm. at Ralph Engelstad Arena.