AWARENESS The Clothesline Project on display in the Memorial Union Ballroom this week. 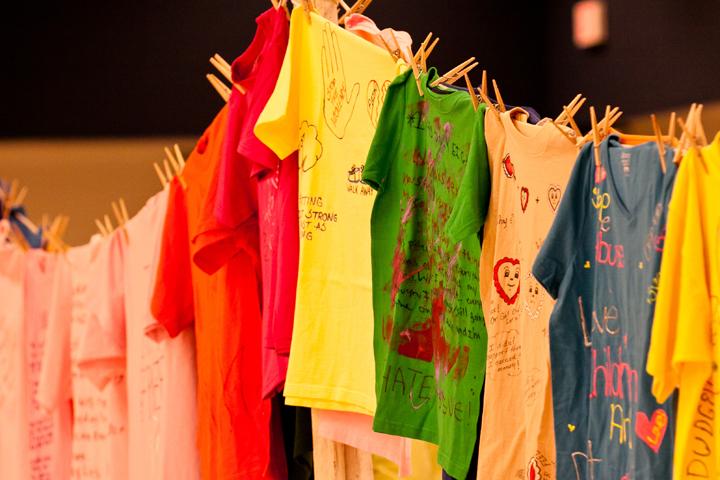 T-shirts hang in the Memorial Union Ballroom as part of the The Clothesline Project. Each shirt represent victims of violence. The project marks its 18th year at UND this year. File photo.

UND freshman Casie Heitala wrote a poem about sisterhood on the back of a white shirt to be hung among more than 700 shirts that will be part of this year’s display for The Clothesline Project. The front of shirt bear’s her friend’s name, “Anne White.”

“She was like a sister to me,” Heitala said.

White was shot and killed in a murder-suicide committed by her boyfriend in October 2010. Her boyfriend was 18; she was 16.

Heitala knew White through their joint affiliation with the International Order of the Rainbow for Girls, a group for girls ages 11 to 20, which emphasizes leadership and service. According to Heitala, the loss shocked members of the organization from across the state.

“I just think (White’s) story needs to live on,” Heitala said. “And it’s not a joking manner; it’s something we need to deal with.”

The 18th annual “Clothesline Project” is a visual display of T-shirts demonstrating the effects of interpersonal violence throughout North Dakota.

Each T-shirt represents someone’s experience and has been hand-decorated by a survivor or by a family member or friend of a victim. The event is sponsored by UND’s Women’s Center, the Community Violence Intervention Center and the North Dakota Council on Abused Women’s Services.

The T-shirts come in a variety of colors, with each color representing a different type of experience.

Red T-shirts represent children who have witnessed violence inside their homes.

The display will be available for viewing every day this week from 8 a.m. to 8 p.m. and from 8 a.m. to noon on Friday. It is free and open to the public.

Heitala attended the event for the first time last year to pay tribute to White and to see her shirt hung along with the others.

“It was a very eye-opening experience,” Heitala said. “I didn’t realize domestic violence was that real. It just made me want to raise awareness so other girls can get help before it gets that far.”

There will also be a few different sounds playing during the display.

North Dakota’s first annual “Clothesline Project” was displayed in 1995 in the Capitol Building in Bismarck. It now travels to cities all over the state. There are separate similar projects being done in every state, according to McIntyre, although the first of its kind was done in Massachusetts in 1990.

“For most visitors, the project is very informative and thought-provoking,” McIntyre said. “All the T-shirts are equally significant.”

Take Back the Night Rally

Another event will accompany The Clothesline Project this week.

The annual “Take Back the Night” rally will be held tonight at 7 p.m. in the Memorial Union Ballroom. The event also is sponsored by the Women’s Center, CVIC and the N.D. Council on Abused Women’s Services.

Approximately 300 to 400 people attended last year, according to McIntyre.

The event will begin with presentations from speakers, including UND senior Sarah Borgen, who is the recipient of this year’s Dru Sjodin Memorial Scholarship.

Sjodin’s mother, Linda Walker will be the keynote speaker.

Sjodin was a 22-year-old UND student who abducted, sexually assaulted and murdered by Alfonso Rondriguez in 2003.

Since then, Walker has made it her mission to speak out against sexual violence, strengthen laws regarding sex offenders, teach children how to protect themselves and advocate for victims’ rights.

Her efforts were rewarded in 2006, when she got to sit in the White House Rose Garden and witness the Adam Walsh Child Protection and Safety Act signed into federal law.

This legislation allows information on sex offenders to be provided across state lines.

The rally will take place outside, following the speakers. Participants will march and chant on the sidewalks along University Avenue.

The Dru Sjodin Memorial Scholarship is awarded every year to a current female UND student, based on her leadership and service and how she will work to promote women’s safety and violence prevention during the upcoming school year.

The scholarship, which is worth $10,000 according to McIntyre, can be awarded to a student in any major or grade level. According to the online application form, preference may be given based on financial need, to North Dakota or Minnesota natives or to active members of Gamma Phi Beta sorority, of which Sjodin was a member.

Jaye Millspaugh is a something for The Dakota Student. She can be reached at [email protected]