The Revival of Regency: Bridgerton, Corsets, Pearls, and More 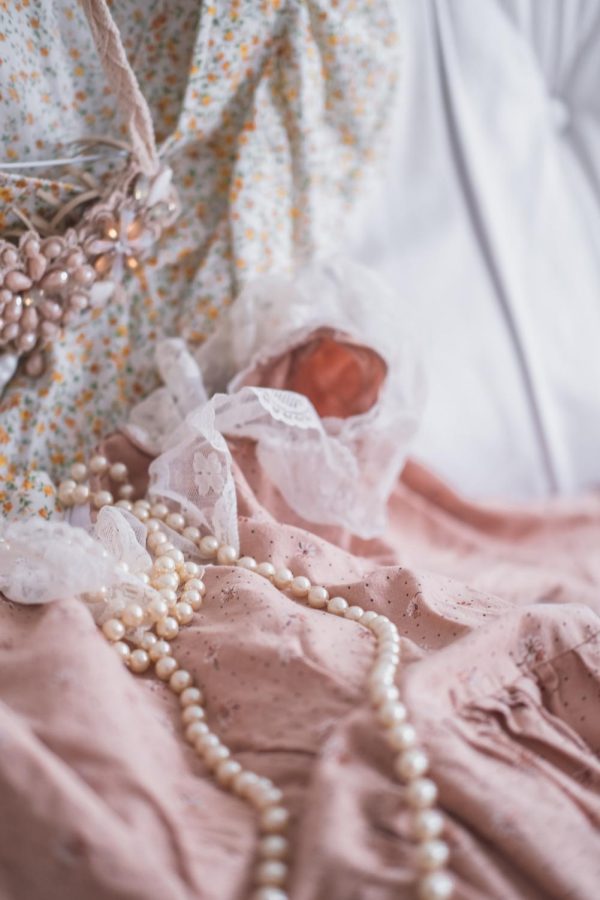 I’m still astounded how Bridgerton rose to prominence. Avon and Harlequin romance novels that were once sneered at have now garnered the attention of millions around the world. Shonda Rhimes, Bridgerton’s creator, made the series not-your-mother’s-bodice-ripper-romance-novel by telling love stories we haven’t heard with characters who represent a variety of cultures and backgrounds.

Rhimes doesn’t stop at simply including POC in her casting, she makes the narrative about them. She integrates race-related struggles into their characterization and intentionally includes cultural traditions to make these characters real rather than trophy quotas; their personality isn’t the token POC. Bridgerton offers a vibrant story within the structure of the regency era while breaking all the historical rules to make the narrative accessible to a modern audience.

By forsaking some of the rigid rules of regency, Bridgerton paints an inviting setting that offers an escape from the world. It’s immersive and showcases vivid characters that mirror modern relatability. People want to find love, to find belonging. Sometimes, we can’t find it in our present circumstances, and regency London makes the perfect narrative playground for those dreams to run wild.

One of the most divisive parts of the show is the costuming. Some fans are in love with the bright colors and glitzy dresses while others are appalled by the lack of bonnets and other traditional regency looks. Nonetheless, Bridgeton’s influence on fashion has pervaded the sketchbooks of top designers as well as department stores.

Although the average viewer lacks the confidence to strut around in a complete regency look (and the assistance to get dressed in layer upon layer with an elaborate updo), brands are scrambling to offer a taste of the Bridgerton style for fans. Upon the release of season one, we saw an influx of corsets and pearls in the fashion world. I’d wager that we’ll see a lot of dainty, silky evening bags like Penelope’s. (For those who know fashion, Molly Goddard has been ON this trend for the past few months. Just waiting for Vogue to catch up on the memo.)

Bridgerton features meticulously crafted dresses, albeit not historically accurate regency dresses. Despite the female characters wearing exclusively empire waist dresses, flouncy “castle-running” dresses have risen in popularity too. The flowy cottage-core looks have flooded the market and are associated with the Bridgeton aesthetic.

Corsets make some appearances on the show, and even though they lack the screentime as other articles of clothing, corsets are another fashion trend that can be traced back to Bridgeton’s regency revival.

Even styles as generic as the updo have been on the incline since Bridgerton’s release. Claw clips may be oh-so 90s, but they do provide an effortlessly swept-up hairdo. Olaplex buns to get silky locks? Headbands that border on tiaras? Need I go on?

Fans have also resonated with the show’s soundtrack – covers of popular songs done by string quartets. (I’m listening to it as I’m writing this. Seriously, it’s so good and transports you to your own personal, portable regency ballroom.) Season one of the show featured mostly Top 40 songs from the 2010s and beyond, and season two followed suit with songs from Harry Styles, Miley Cyrus, Rihanna as well as 80s Madonna and 90s Nirvana. The show also included Bollywood’s 2001 hit “Kabhi Khushi Kabhie Gham” which is another nod to the romantic lead’s Indian heritage without feeling forced.

My hot take? Social dancing needs to make a comeback, and Bridgerton could be the greatest catalyst of all. With so many stunning evenings spent in the ballroom following the characters and their drama, it would be difficult not to notice all the dancing going on in Bridgerton. Regency era dancing manages to be sensual yet innocent, and partner dancing is a fun way to let loose and get in some daily movement. (I learned how to swing dance in college, and there is something so carefree about twirling and spinning to relieve stress.)

From fashion to music, Bridgerton’s earthquake debut is still creating seismic waves. The show has been renewed for a third and fourth season and does not appear to be slowing down anytime soon.

Claire Weltz is a Dakota Student Arts & Community Editor. She can be reached at [email protected]