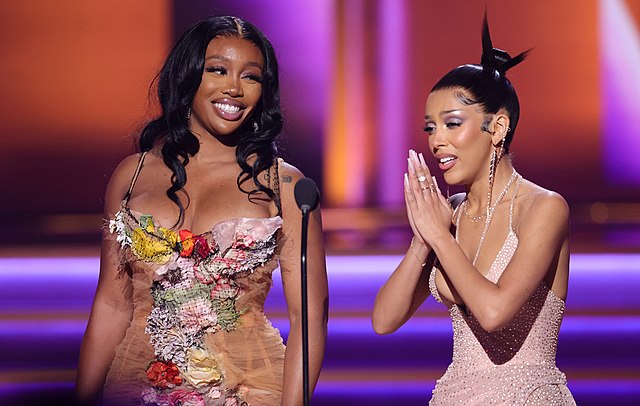 With the eventful Oscars happening just last Sunday, another award show followed just a week later. On April 4th, 2022, the recording academy hosted the 64th annual Grammys. With The Grammys starting in 1958 with only 28 categories recognized, the current Grammys awards consist of 84. The host of this year’s and last year’s show, Trevor Noah – a late-night show host and comedian –  strongly delivered on his hosting duties. He poked fun at famous faces, such as Justin Bieber and Kanye West, who were not allowed to perform at the Grammys because of  “concerning online behavior.” Noah even took a jab at Will Smith, who a week earlier slapped Chris Rock, creating a viral buzz that continued into this week’s award show.

Highlights of this musical night included an appearance from the President of Ukraine. Volodymyr Zelensky appeared and pleaded with the musicians for support through the ongoing war with Russia. A tribute from singer John Legend followed his speech, singing “Free,” images from the brutal fight and suffering played overhead.  Performances also consisted of a small rendition of “Somewhere” from the remake of West Side Story, the iconic BTS performing their hit Butter, H.E.R. and Lenny Kravitz performing “Are You Going to Go My Way,” and Batiste – this year’s album of the year winner – performing “Freedom.” I’d like to especially note that Tik Tok’s own Emily Bear and Abigail Barlow won a Grammy for best musical theater album for their composition of  “The Unofficial Bridgerton Musical,” showing that anyone can be the “diamond of the season.”

Overall, the Grammys were a breath of fresh air following last week’s intimidating Oscars. And although this award show may not have been on many people’s radar, it was one that held value and took a stand for the people of Ukraine. With the president’s appearance bringing a serious note to the night’s entertainment, he reminded viewers that, “Our musicians wear body armor instead of tuxedos. They sing to the wounded in hospitals. Even to those who can’t hear them. But the music will break through anyway. We defend our freedom. To live. To love. To sound.”

Winners of the 2022 Grammys

Album of the Year: We Are by Jon Batiste

Record of the Year: Leave The Door Open by Silk Sonic

Song of the Year: Leave The Door Open by Silk Sonic

Best Traditional R&B Performance: Fight For You by H.E.R.

Best Rap Album: Call Me If You Get Lost by Tyler, The Creator

Best Rock Song: Waiting On A War by Foo Fighters